The letter is U, for Maurice Utrillo 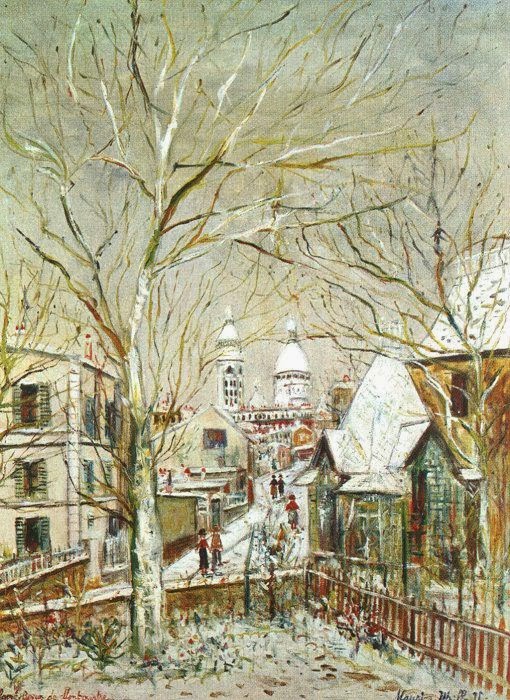 Utrillo
b. 1883    d. 1955
On one of our trips through the alphabet I included paintings by
Utrillo's mother, Suzanne Valadon, who was taught and encouraged by Degas.
Her child, Maurice Valadon, whose paternity was never recognized,
became Maurice Utrillo when Miquel Utrillo, a friend of Suzannes, in a spirit of kindness
bestowed upon him his own name.
Maurice was a highly neurotic child and by the time he was eighteen he was
committed to an asylum temporarily because of his alcoholism.   One of the doctors there
advised his mother to encourage him to take up painting as an emotional outlet
to help him regain his equilibrium.
Despite many alcoholic relapses with self destructive tendencies,  through his lifetime
Utrillo produced thousands of oils, gouaches, water colors and pencil sketches,
becoming a legendary figure who in 1929 was awarded the
Cross of the Legion of Honour
by the French Republic.
Many regard him as the century's greatest painter of urban scenes, and recognize his genius.
"Above all, Utrillo has an eye for Montmartre, the old, picturesque and
relatively quiet artists' quarter as it existed before the First World War.  He is fascinated
by the sad little streets and miserable bistros of the industrial suburbs."
In his fifties Utrillo married the widow, Lucie Pauwels, who managed his
interests so ably that he was able to live in 'grand' style in Paris,
and both she and his mother, Suzanne, are credited
with the peace, rather than tragedy, with which his life ended.
Find more representations of the letter U here, at ABC Wednesday
with thanks to Denise and Roger and all others
who make this meme so Utterly Fascinating.
﻿
Posted by Hildred at 7:19 PM

Thanks for that. Utrillo was an artist I was aware of and admired when I was a keen young schoolboy artist. Somehow my life moved a long way from there and I'd forgotten all about his pictures (and I've rather deserted my own, though I've promised myself that when I retire I'll resurrect this interest).

I had never heard of Utrillo, but thanks to you I know a bit more about him. This painting is so really French impressionism. I recognized Montmartre.
Have a good December month!
Wil, ABCW Team

most informative. i knew very little before.
ROG, ABC Wednesday

Once again, and I know I sound like a broken record, I so enjoy your alphabet posts because I learn something new from every one of them.

You find such interesting tidbits to share each time you walk through the alphabet.