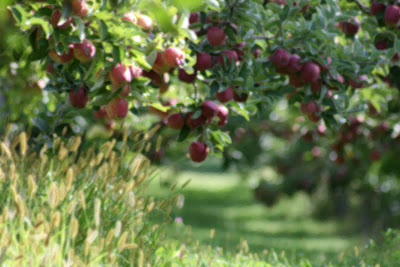 Season of mists and mellow fruitfulness,
Close bosom-friend of the maturing sun;
Conspiring with him how to load and bless
With fruit the vines that round the thatch-eves run;
To bend with apples the moss'd cottage-trees,
And fill all fruit with ripeness to the core;
To swell the gourd, and plump the hazel shells
With a sweet kernel; to set budding more,
And still more, later flowers for the bees,
Until they think warm days will never cease,
For Summer has o'er-brimm'd their clammy cells.
John Keats,  To Autumn

We went for a drive today, Charles and I. Around by Ginty's Pond and up into the mountains, looking for Autumn.

Found a duck in the Pond. Quiet and still, and I wondered what he might be contemplating. 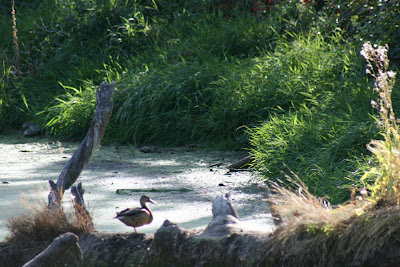 In the surrounding fields a faint hint of fall touched the sumac, and the wind turned the leaves of the poplar this way and that, silver in the sunlight. 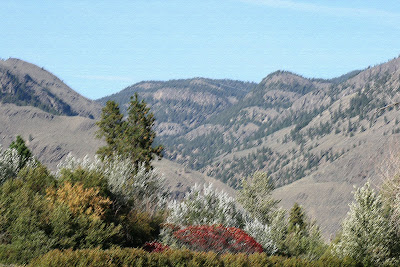 Around the corner, at the other end of the Pond, nothing stirred. Occasionally we have seen a water creature swimming to the other shore, but today only the reflection of the trees and grasses rippled ever so slightly. 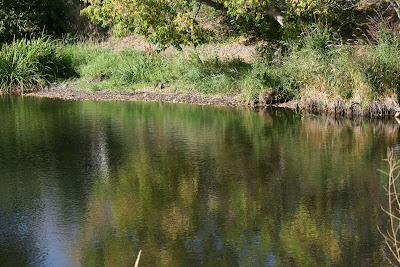 We took the road that rises from Cawston, cutting through the hills to the Okanagan Valley. The road, as it rises out of the valley, is steep and winding and narrow. When we first moved to the Similkameen we settled on dry sagebrush land, and while we were establishing the farm Charles drove logging truck down this precipitous road.

He pointed out to me a rocky corner where he had had to ditch a load of logs which weren't going to make it to the valley bottom because of road conditions, and I sighed and thought about being young and accepting of these dangerous jobs.

Well, was it any more dangerous than flying a Lancaster over enemy territory?

The road was a terror, but I thought the rocks were quite interesting. 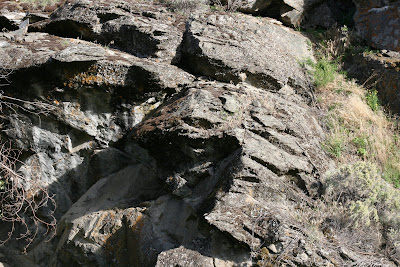 The yellow rabbit brush lined the roadside, and we ran into a half a dozen bluebirds, but unfortunately I was not adept enough to get a decent picture of them. Never mind, here is the rabbit brush.... 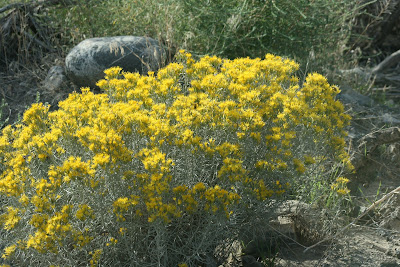 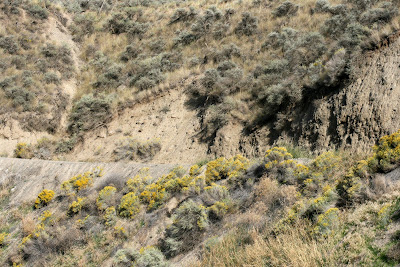 ..down into the valley. 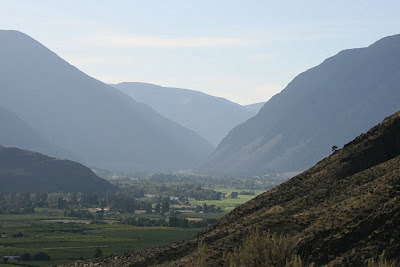 He's there alright, Old Autumn, scouting around in the hills, waiting for summer to leave the valley.

I am reminded of a quote from George Washington Cable...

"For summer there, bear in mind, is a loitering gossip, that only begins to talk of leaving when September rises to go."

We have a ways to go yet before the trees turn into torches, here in the valley.
Posted by Hildred at 2:54 PM

Looks like you had a pleasant afternoon, thanks for sharing.

Oh you have me ready for Tues, yes the first day of Fall. Can it be so soon? George was right in his thought, Sept gets up and fall sits down. What a lovely day you must have had.

With your words and photos I was able to come along with you on this pleasurable afternoons drive and see a part of the world I have never been. Thankyou.