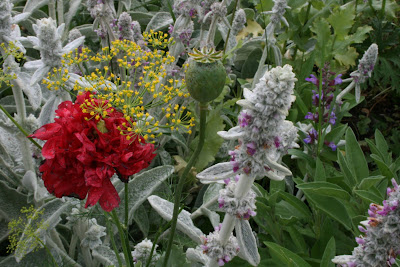 We woke this morning to a soft rain, falling silently, - to the lovely smell of damp earth and the gentle sighs of thirsty plants.

In a little while the rain stopped, but the clouds and the sweet drops of water on leaf and petal lingered. 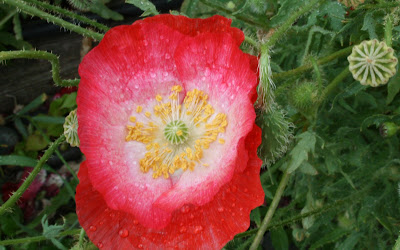 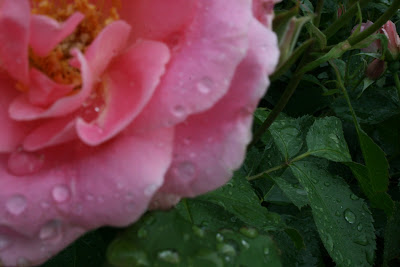 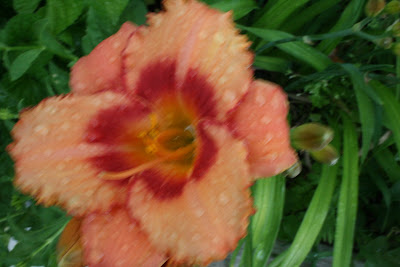 I opened my mail this morning and found an e-mail from Barbara Crafton, wherein she told of the July 4th celebration in the city of Florence, in Italy where she is at St. James Episcopal Church. I only meant to mention the last sentence in this post, where she tells of the singing of the American National Anthem, and the custom of placing one's hand over one's heart during the singing, - a gesture I find to be meaningful and expressive, no matter how casually it is done. And I wish it was the custom in Canada where sometimes the singing of O Canada is blatantly ignored.

But the whole posting from Barbara Crafton was so great I decided to post it in its entirety.

"We had a table at the annual Tuscan-American Association's Fourth of July party, so we brought out our stash of St James refrigerator magnets, pocket crosses and pocket cards of the Lord's Prayer in different languages, St. James aprons and St. James tote bags. We joined forces with Agape Italia's Malawi Project, which is building a school in a remote village there, and the cast of Macbeth, which is opening this Wednesday. Tuscany, Malawi, Shakespeare -- it was a melange of the kind that reminded me yet again why I like the Episcopal Church so much.

Everyone was there: Italian chefs serving up insalata de farro, a land-office business in bagels and cream cheese, nachos con queso with jalapeno peppers. MacDonald's had piles of cheeseburgers there for the taking, and volunteers grilled hundreds of hot dogs, the unmistakable symbol of American-ness here. There was a country music band. The mayor spoke, and the president of the Tuscan-American Association, and the American Consul General. Both the American and the Italian national anthems were played. There were pony rides for children and a few adults, who allowed themselves to be led incongruously around the field. The Macbeth cast gave a fight demonstration. A dancing school presented a very long program of everything from belly dancers to top-hatted showgirls in fishnet stockings, assisted briefly by an enthusiastic drunken man, who was helped gently off the stage by the dancing teacher.

The Medici, though long dead, had kindly loaned us their country estate in Pratolino: it is now a public park. We drove in toward their villa along an elegant avenue of plane trees, past an enormous statue of a giant, hewn in the 16th century out of one mammoth rock. The omnipresent Medici shield still anchors the corner of the building, but that is about the only sign of them. It's for the best: they wouldn't have enjoyed the party. They would have been appalled at sight of hundreds of people they didn't know swarming into their house and over their lawn. Doubtless they would have called out their guards, who would have made short work of us all. But the huge garrison and stable are empty now. And there are no more Medici.

It was time for the big production number at the end: all the dancers, the top-hatted showgirls, the Afghan tamborine dancers, the pink-tutued ballerinas, the blue-jeaned head-banded hippies who had given us their rendition of "Age of Aquarius," trooping around and around on the stage, bearing the Italain and the American flag while the loudspeaker blared "The Stars and Stripes Forever." And it was time to go home.

The winding descent toward Florence from the hills surrounding it was breathtaking: the patchwork of olive groves and vineyards, the dark rows of tall cypress trees, the umbrella-shaped Roman pines on the hilltops, the villas dotting the hillsides. It was a descent through glorious nature, ordered by centuries of human presence. It was the Italy you see when you close your eyes and dream of Italy. The new home of the ones who left their American homes behind -- some for a season, some forever. It is beautiful here. But I had looked around during the playing of "The Star-Spangled Banner." Many had stopped what they were doing, had stood still and placed their hands over their hearts. Which is what I did.

+
To read a translation of the Italian national anthem, and hear Luciano Pavarotti sing it, visit http://www.romanlife-romeitaly.com/italian-national-anthem.html"

My third little bit of interest in my bowl of potpourri concerns the use of local food, and what seems to me the immense good sense of taking advantage of everything that is grown in the ground around you, within a reasonable radius.

In this apple growing country I found a display of a dozen different kinds of apples in the local store, and of this dozen only the Golden Delicious were Canadian. The rest were from the U.S.and New Zealand and other far off places....transported thousands of miles to markets in this country. And quite probably, at least in New Zealand and other far off markets (not the U.S.) they are finding the same situation reversed, and all our Canadian apples sitting on their grocer's shelves.

Even as I speak there are cherries from the U.S. threatening the bumper crop in B.C. (which is just being picked) by being dumped here at low prices.

Doesn't it all make you raise your brows, roll your eyes and scratch your head!!!!
Posted by Hildred at 9:53 AM