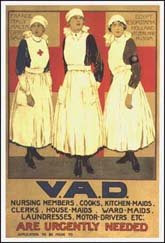 This is the story of V.A.D.s in the First World War.

Katharine Furse took two VADs to France soon after the outbreak of the First World War. After establishing a hospital at Boulogne, Furse returned to London where she became Commander-in-Chief of the organisation. During the next four years 38,000 VADs worked as assistant nurses, ambulance drivers and cooks. VAD hospitals were also opened in most large towns in Britain.

At first the military authorities were unwilling to accept VADs on the front-line. However, this restriction was removed in 1915 and women volunteers over the age of twenty-three and with more than three months experience, were allowed to go to the Western Front, Mesopotamia and Gallipoli. Later VADs were sent to the Eastern Front.

Some women went to the Western Front as letter writers for soldiers who were either too ill or too illiterate to write their own letters. May Bradford, the wife of John Rose Bradford, Physician to the British Expeditionary Force, later recalled how she educated men on the treatment of women: "To one man I said, 'Shall I begin the letter with my dear wife?' He quietly answered: 'That sounds fine, but she'll be wondering I never said that before."

In the Second World War the V.A.D. system was still in place and 15,000 members of the St. John's Ambulance Brigade or the Red Cross served as either Mobile (posted) or Immobile (Aids who stayed in their own community)

Towards the end of World War 11 I was an Immobile V.A.D. and helped week-ends and some evenings in the Royal Alexander Hospital in Edmonton. We had extensive training before our hospital experience, but in reality our main occupations were making beds, giving back rubs and emptying bed pans...

A small contribution, but one that I enjoyed. Hospitals were different sixty-five years ago. Much more regimented, - Matrons and Head Nurses were pretty impressive looking individuals, and the R.N.s in their starched caps and uniforms gave patients a great feeling of confidence. They looked very swish and glamorous in their navy capes, whereas the lowly V.A.D. looked just like this.... 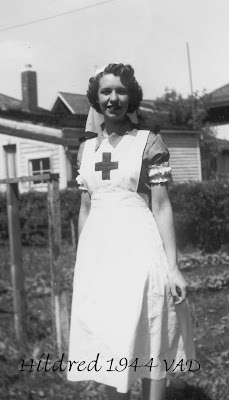 Oh, Hildred, what a lovely photo...and a very interesting post. I have never heard about VAD before. I love the letter writers and the "my dear wife"...

I remember the VAD's well Hildred - lovely photograph too.

What a great photo and story. The uniform reminds me a bit of the uniform I wore in England (last week's U-entry to ABC Wednesday), which probably was based on the ones worn during that era.

"To one man I said, 'Shall I begin the letter with my dear wife?' He quietly answered: 'That sounds fine, but she'll be wondering I never said that before."

Oh, that is both sweet and sad. I hope he learned to tell his wife how much he cared.

My Mum was a nurse in Epping during the war. Not too far from our own Edmonton, in London, England!

What an interesting V and a lovely photo memory.

Thanks for visiting, - I always liked my letters to begin with Darling, but 'my dear wife' is pretty sweet too.

What a fun story with a photo as a plus. You must have been a bright spot for many hospitalized folks. My parents met because my mom was a candy stripe worker right after the war and my dad's sister was a nurse and set them up on a double date.