U - is for Ubiquitous (meaning everywhere at once; omnipresent)

And when I think ubiquitous (not a pretty word) I immediately think Garden / Yarrow
/ Physilis (Chinese Lantern)/ couch grass / and to this motley crew I am this year forced to add the Sweet Violet who is everywhere at once, - along the garden path, in the midst of the Iris, the Peony, the Delphinium, the Shasta Daisy. The cruel winter that took the roses must have been kind to the violets - I have never seen them grow so tall, so bushy - great mounds of green leaves. And come to think of it, not many flowers in these overgrown plants. In the small violet plants, yes, - they were a delight in the early spring. But where have these ubiquitous violets come from?

Imported by the Yarrow, perhaps? What I have in my garden now is the common variety of yarrow, - the rather off colour white with the ferny leaves. In the lost Garden I had a rainbow variety of beautiful Yarrow, but here, alas - where the Chinese Lantern and the Violets leave room they crowd in every available space, - common and pushy and UBIQUITOUS... 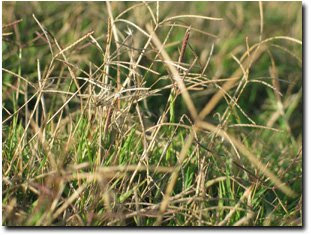 The Coutch grass we take for granted, - it establishes itself at the base of a plant and then reaches slender stalks far above the cherished and cultivated plant, so that when you look at the garden with a photographer's eye, or a visitor's eye, all you see are waving spikes of coutch grass, like a cobweb on what you hoped was a pristine ceiling.

For a number of years I tried to establish the Chinese Lantern in my garden, but they turned their backs on me and shunned the rich loam. However, someone whispered in their ear 'ubiquitous - if you really try you can be everywhere at once'! And so they were, and are - - they have established an underground railway (of which I have spoken before in blogs) that details stations every few feet in the garden and from which passengers alight and push their way through to whatever space is available to them. And yeah, even across the road and field they send out branch lines! 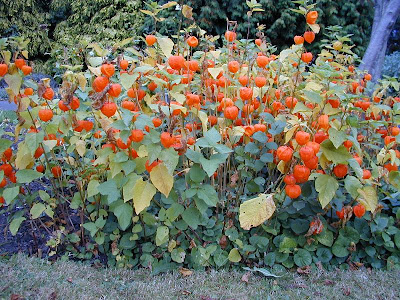 These are the UBIQUITOUS - they come to stay, but they are only visitors. Their true home is in the wheelbarrow, and eventually the compost heap where they will be worth their weight in gold. And as I dispatch them to their rightful place I mutter, ubiquitous, ubiquitous......
Posted by Hildred at 9:20 PM

A very clever use of a word and the letter U.
I liked the end of the post where you talk about the wheelbarrow being its proper place of residence.

Your ubiquitous flowers seem very determined. Here, in NSW, the lantana (which I think is a beautiful flower) is a weed. It takes over whole areas of bush and seems to be laughing at us.


I love the way you write.

I dunno. I LIKE the word ubiquitous. also love the flowers or the weeds depending on POV

Actually, I love this word and used it for my U post in the last round! Why is it that the plants we don't really care about so much are so tough and spread so easily, but the ones we desire have to be babied and coddled?:)

Thanks for visiting me. You have a lovely blog, and I enjoyed reading your profiles. Your family will certainly appreciate your record of stories and family history as well. I should suggest this to my father; my parents will be celebrating their 61st anniversary this summer.

Great idea for U. I shall use it as I mutter to the dandilions. I have a soft spot for violets (and forget-me-nots) so tend to indulge them a little.

How funny! My own sweet violets were ubiquitous this year too - but they also flowered profusely! I've never seen so many. I picked many bunches to scent the house. :)

A creative post...love your story about the chinese lanterns...and the wheelbarrow...

Hello Hildred,
While you're wheeling away the Chinese Lanterns, would you come by Breckenridge and dig up all my UBIQUITOUS Bee Balm for your compost heap? I enjoyed your post!

Clever! I've learned to live with things that want to take over...Violets everywhere - but they go well with dandelions...

Barb, - I will be along for the Bee Balm once the Borage, with it's lovely blue star flowers, has sprung up ubiquitously, - I think it rides the Chinese Lantern Underground....
Rinkly, I do admire your rhymes and meter. and thank you to all who visited. I will try to learn to love at least the word ' ubiquitous' - it does have a certain lilt to it..