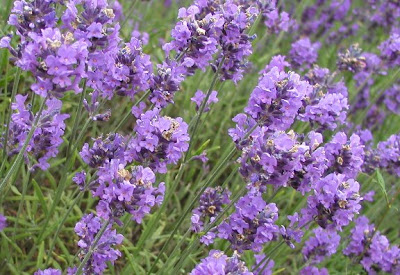 HERE is a pretty site to find out about all the wonderful pleasures Lavender can bring you, - its fragrance, its use in cooking, in aromatherapy, in cosmetics, and just making you feel you're pampered and in heaven.

And while you're there listen to this lovely song, sung by Burl Ives. It will stir your imagination and send you to wander in days gone by amid the romance of your grandparent's era.

And here are some lyrics from days gone by that are slightly more risque than the modern version of 'Lavender's blue, dilly dilly"

Edward Rutherford, author of London, linked the song to the environs of London where in the 17th-century London lavender was cultivated for perfume.**

An enchanting fragrance.....
Posted by Hildred at 1:58 PM

Lavender is so wonderful. They grow it quite a bit up in the Pacific Northwest. I invite you to come see my 10,000 year old lake water. - Margy

I went to Provence to see the lavender fields and was too early to see them in bloom.
I know the poem you quote although here in UK we say "dilly, dilly" rather than Diddle. It is also set to music as a children's Nursery Rhyme.

Oh my head knows this song by heart but I don't know why, it must be deep in my childhood. We sang it dilly dilly too. Mr. Ives lived just up state from us and I always pictured myself sitting on his porch listening to him sing and play. Sad when he left us!
Now take a deep breath and see if you can smell purple!