Considering the date, - which marks the anniversary
of the birth of my beloved husband,
here are a few words to mark
his extraordinary contributions to all those things
he became involved in
during  his life here in this valley.

In the first decade of the 20th century a number of Yukon gold miners and entrepreneurs heard of land being sold in the beautiful Okanagan Valley for $100.00 dollars an acre, and sight unseen they invested, with the intention of planting orchards.

Vincent Finch arrived from the Yukon in 1910 and was soon joined by his son Albion.  In 1913 Sidney Finch was persuaded to leave Hoodsport and the family business at Finch Creek to help for a few weeks on the newly planted orchards, but his stay was extended for almost seventy years when he also bought orchard property.  He married Violet Hunter, but within two years she died from tuberculosis.

In 1920 Sidney married Mabel O’Callaghan, a young widow with two children, Hazel and Tom.  Their first son, Gordon, was born in 1922, and Charles, their second son, on February 12th, 1924.  A daughter, Wenonah, completed the family two years later.

Despite the economic difficulties the depression brought it was a wonderful place to raise a family, with the lake close by, the surrounding hills where one could hike and hunt and fish, and a community of young farming people in a similar situation with young families and friendships that have continued throughout their lives.

Charles took the bus into Penticton for his schooling, along with other Benchland children.  He attended his last class reunion in June of 2012, but they had been held annually since the 40th anniversary in 1982.

There was music in the home. – violin, fiddle, piano and tuba (which Charles played in the School Band)  which was to instill in him a great fondness for music and singing.  In the home in which his own children were raised there were two very large speakers which carried phonograph music through open windows into the orchard (where everyone was picking or hoeing or planting) and fostered this appreciation in his own children.

At the age of eighteen Charles enlisted in the RCAF, and while undergoing training at ITS in Edmonton met his future wife, Hildred Thompson.  He went on to High River, and then to Curry Field in Calgary, where he was awarded his wings 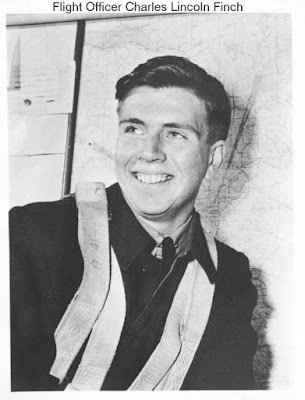 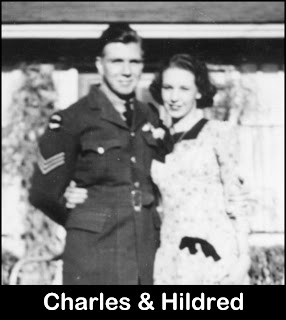 On arriving in the UK Charles received further training on heavy aircraft, and eventually with his crew joined an RAF Squadron, # 170, at Helmswell where he was a Lancaster Pilot carrying out operations over Germany. 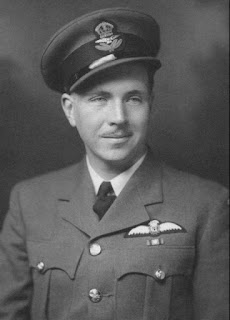 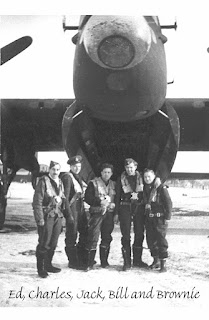 His half brother, Tom had died in the Falaise Gap, and In March of 1945 his second brother was killed at a Battle in the Hochwald Forest.  Charles was withdrawn from duty and arrived in New York on the 1st of May, a few days before the war ended.  He and Hildred were married in Edmonton on May 12th. 1945. 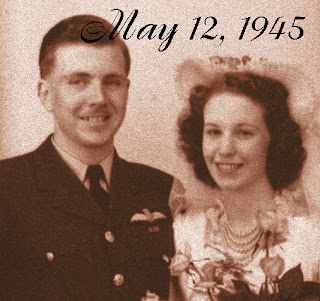 After five years in Penticton, and three children later, the family moved on to the Cawston Bench and the Fairview Heights Irrigation District, a VLA project for Veterans.  Charles worked with PFRA setting up the project and then acted as Secretary-Manager and Bailiff for a few years, after which he joined with many of the other veterans working in the logging industry and in local sawmills until the orchards they had planted came into production. The younger three children of the family of six were born during this time. 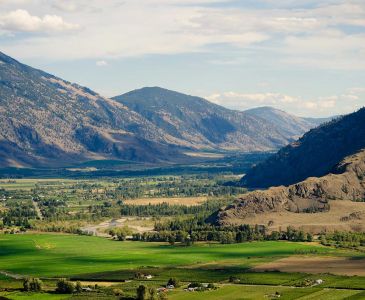 Charles had a clear vision and a keen sense of awareness of the consequences of actions and events, as well as a serious commitment to his citizenship, and these qualities lent themselves well to a leadership role in many of the activities he became involved in, - the Cawston Board of Trade, as Chair of two Centennial Committees, ten years as School Board Chair and a driving force behind the formation of Okanagan College in which he spent six years as a persistent Chair of the College Council in the face of the many parochial difficulties they dealt with in establishing the College. 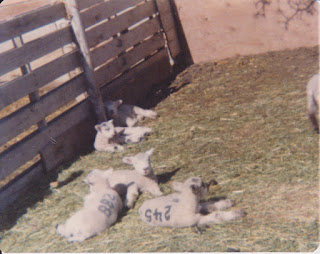 He was active in the Canadian Legion and was twice President of Branch 192 in Keremeos, with a Lifetime membership award.

He will be sadly missed as the strong voice who called out the names of The Fallen in two World Wars at Remembrance Day Services in Keremeos. 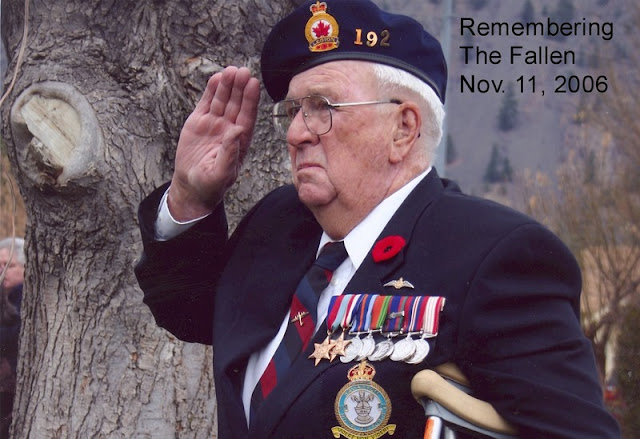 For a while in the 1980’s Charles went adventuring as an Independent Trucker in a wonderful old Kenworth, but in 1987 he and Hildred retired to Keremeos and a life of weaving (to which he contributed wonderful and innovative additions to the looms) golfing, camping, bridge and fishing with old friends. 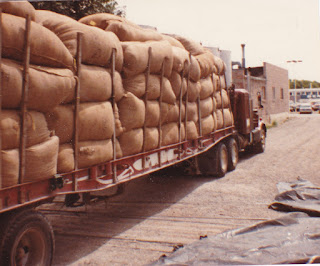 They took advantage of the leisure time to visit England, France and Holland for two Squadron reunions and to visit Charles’ brothers’ graves in Europe. 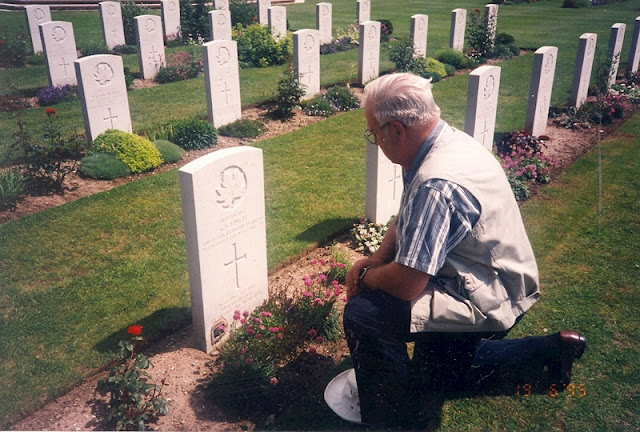 During the war the crew who flew with Charles had formed a strong bond, as was the case with so many other men who faced danger in the skies together.  In 1997 they traveled to Canada for a reunion in the West, motoring from Calgary through the Rockies to Keremeos and on to Vancouver. 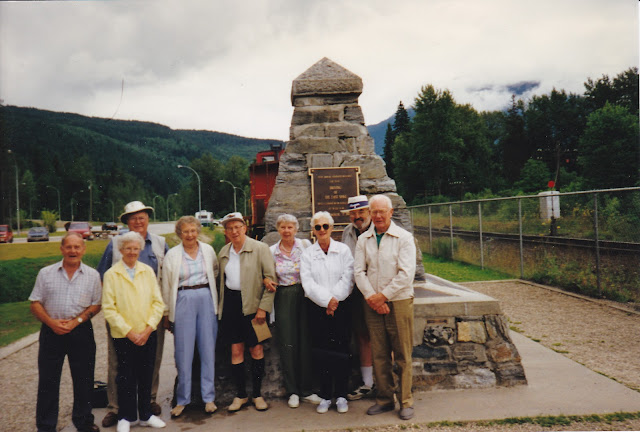 In the early 1990’s Charles spearheaded renewed activity in the Similkameen Branch of the Okanagan Historical Society and during this time, while he was President, the Annual OHS picnic was held at the Pow-Wow grounds on First Nation’s land in the Ashnola River Valley.

Shortly after the family moved to Cawston Charles had suffered polio in probably the last of the great epidemics before the Salk Vaccine, and this came back to haunt him in his final years when he was stricken with neuropathy, greatly affecting his mobility.  He found some solace in his involvement with the Senior Singers at the OAP in Keremeos, where I am sure his quirky smile, his endearing way of putting people at ease and his nice tenor voice are missed, - there and by those who loved him so.

What a wonderful tribute Hildred. It made me smile because as a child in Lincolnshire I grew up about ten miles away from Helmswell and as I was born in 1932 I remember the Canadian Airforce there in the war years.

It's a beautiful tribute, a story that should be documented and read by younger generations, especially this current one! You are a blessing to all who read your lovely blog, Hildred. I have yet to read all your stories along the side. This is all the makings of a wonderful book.

Thank you for sharing this condensed version of Charles's life--he was surely a grand family man and neighbor. I sense a zest for life and many rewarding interests.