In between working on the current shawl 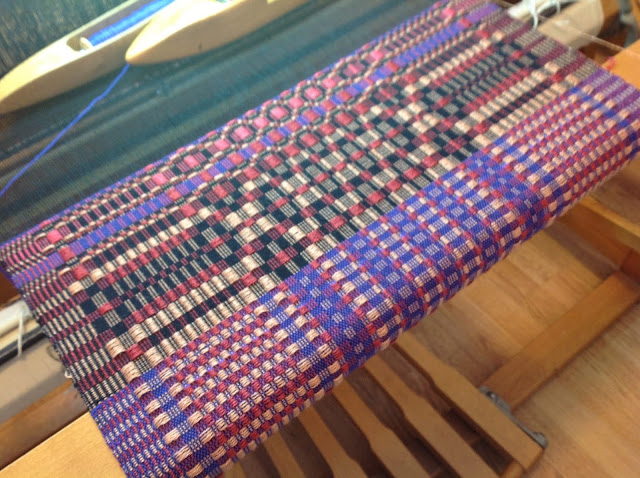 (which requires me to be very diligent and concentrated

because of its intricate pattern)

I am watching a bit of Scottie's Curling

when I break for a little rest,

and marveling at the ability these girls have

(it's a Woman's competition)

of tossing a rock down the ice and being able

to aim it so aptly that it

sends another rock flying, or skidding, or sliding.

however their eye and their hand

The first thing I had to do this morning, though, 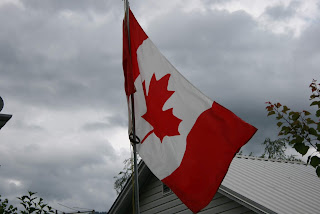 anyway, I noticed that the wind had been playing havoc

with the flag, and it was entangled in the

climbing rose, beneath it.

The Beloved, from on high, would have been very upset

to see the flag so disabled, and I was prone to do something about

Luckily there was a long pruned limb leaning against

the house (and I know not how it arrived there, but was happy

Between the limb and my cane, which accompanies me most places,

I was able to disentangle the flag from the rose spurs

and gradually bring it within reaching distance, free

I folded it up reverently, and took it into the house,

to be replaced by a new emblem

that indicates this is the house of a patriot,

and I hoped my dear one would be happy with the effort!!

The sun is shining this morning, - there is blue sky

and there are white clouds.

The catkins have not yet acknowledged that spring is

around the corner, and if the spring bulbs

have started to poke through the ground

they will have discovered a half a foot of snow impeding their progress!!

However, we had a mild January, and I guess winter

had to put in an appearance sometime before the March winds do blow!!

The Christmas Hellebores were lovely,

and I'm sure the Lenten Hellebores will be just as beautiful

even though Lent is late this year......

A day of happy destiny!!

I'm off to deal with this precious day.


While having lunch I was leafing through a book

and came across this poem by Lynn Ungar,

The Way it Is

"One morning you might wake up
to realize that the knot in your stomach
has loosened itself and slipped away
and that the pit of unfulfilled longing in your heart
has gradually, and without you really noticing it,
been filled in - patched like a pothole, not quite
the same as it was, but good enough.

And in that moment it might occur to you
that your life, though not the way
you planned it, and maybe not even entirely
the way you want it, is, nevertheless -
persistently, abundantly, miraculously -
exactly what it is.

Oh, Hildred, the shawl is such a beautiful piece. How it must delight you there on the loom as it brightens these winter days. The yellow jonquils are blooming here, so surely spring can't be too far away.

The wind's action gave you quite an everyday adventure! The poem is wonderful and I will save it.

That poem has done me a great deal of good today Hildred - thank you for posting it.