The letter is G for GROOKS 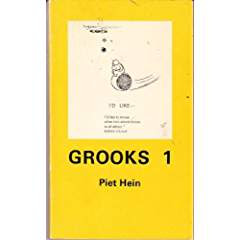 The first book (and there are many) 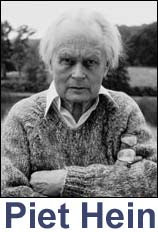 One of the most original Danes of the 20th century he was a many-sided man in the best sense.

An author, philosopher, mathematician, designer, scientist, game inventor, as well as the creator
of a new form of poetry he called "Grook".

In his philosophical writings he asserted that the great cultural divide in society was not between the haves and the have-nots, but between the knows and the know-nots - and to myself I whispered "yes, yes, yes".

"Piet Hein wrote over 10,000 grooks, most in Danish or English and published in more than sixty books....His grooks first started to appear in the daily newspaper "Politiken' in April 1940 - shortly after the Nazi occupation and under the Old Norse pseudonum "Kumbel" meaning "tombstone"

Grooks are small aphoristic verses characterized by irony, paradox, brevity, precise use of the language, sophisticated rhythms and rhymes, revealing in a minimum of words and with a minimum of lines some basic truth about the human condition."

Here are a few examples to wet your appetite.......

Our choicest plans
have fallen through,
our airiest castles
tumbled over,
because of lines
we neatly drew
and later neatly
stumbled over.

Today I really like this one, the February sun being loathe to appear......

PRAYER (to the sun above the clouds)

Sun that givest all things birth
shine on everything on earth.

If even that's too much for thee
shine at any rate on me.

More interesting Gs here at ABC Wednesday
with thanks to all who have, are and will maintain
this lovely meme.
Posted by Hildred at 11:27 AM

Oh my gosh I am afraid I was a 'know not' -- at (the very) least about this bright and witty man. I love the Grooks and the ones you shared definitely resonate right now. Thank you for teaching me to KNOW about this man (and for much else that you have taught me)... I am going to see if any of these books are still available for purchase or through the library.

Very interesting. I had not heard of him before and I like his writings. I like how I always learn something totally new here. It is nice to know that knowledge is the most important thing we can actually own. And to have someone validate it.

Impressive and interesting..I would like to explore this genre Grooks more! Loved the usage of Shakespearean diction in the last one (Prayer)..
Thank you Hildred:)

Polymaths always intrigue and astonish me. Love the grooks.

Wow! I didn't knew about this poetry form. Thanks for sharing Grook form of poetry with us :)