The letter is V for The VENERABLE BEDE


In the first place the title "Venerable" is bestowed on Anglican Archdeacons
and on saintly Roman Catholics.

In order to live up to the adjective one must be wise and esteemed, respected and reverential,
and being ancient helps as well...

The Venerable Bede fits the bill! 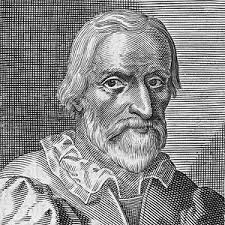 He lived and died in between the twin monasteries of Wearmouth and Jarrow in the northeast of England between 673 and 735 AD.

Widely regarded as the greatest of all the Anglo-Saxon scholars he wrote or translated some forty books on every area of knowledge, including nature, astronomy and poetry.  However his most famous writing was on theology and history and his best known works is the
Ecclesiastical History of the English People.

He is remembered today as the earliest English Historian, whose work has shed light
on a period of English history that would have otherwise been unknown.

The Venerable Bede's bones have been in Durham Cathedral since 1022,
when they were brought from Jarrow by a monk called Alfred,
who had them buried alongside Cuthbert's relics.

They were moved to the Cathedral's Galilee Chapel in the 14th Century. 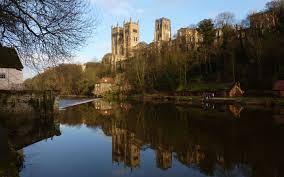 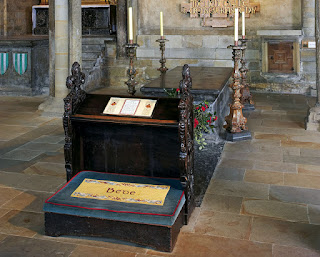 When we in the 21st century become too complacent and pleased with ourselves
we might remember our beginnings
and the wondrous things accomplished by the people of that time, the Dark Ages,
without benefit of the technical devices which aid us today, -
and I think especially of Sir Google as being pertinent to this blog!!!

More interesting Vs here at ABC Wednesday
with thanks to Roger, Denis, Leslie, Melody
and all who have helped make this meme so fantastic.

Wonderful take on V.... such people ' wrote' historie by living the way they did

In my old Methodist church, I used to give tours of the building. There's window of the Venerable Bede!
ROG, ABCW

This is why I love history so much! We need to look to our past in order to move forward in life with wisdom.

Hi Hildred, thanks for sharing the information about Bede, he certainly was venerable.

I have a few times [very few] used the adjective 'venerable'--correctly as 'ancient' I think, and of course one has heard of Bede--but I didn't know that much about him or his contributions. Thank you for an interesting 'V' post.