G is for Goulash

The letter is G for Goulash 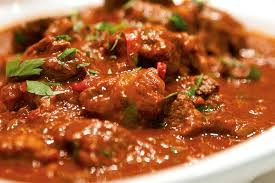 Not part of my repertoire,
but I have such fond memories of the goulash made by a family friend,
when I was a child.

And so the other day I made a pot of Goulash
and although not exactly enchanted by it
I was really very pleased, and vowed to make more.

I made my Goulash American style,
with ground beef and tomatoes and
elbow macaroni 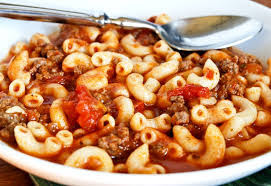 But I am reminded of the wonderful history of
Hungarian Goulash
and the practically of taking along a
dish that cooks while you herd cattle. 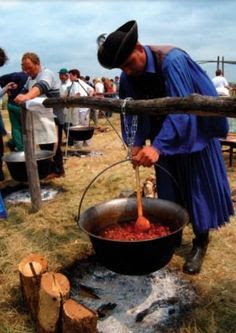 This thick, hearty dish is popular with herdsmen in Hungary.
They make it in a cast-iron kettle hung above an open fire, out in the fields.

The herdsmen have the best ingredients at hand -  prime quality beef, and as it cooks while
they work it goes well with their lifestyle.

During the 19th century, when there was a general raising of
national awareness of Hungarian culture
language and 'gastronomical delights'
this peasant dish came to be accepted by town folk, and even the elite.

Today it is a tourists' favourite, and is featured
in all the best restaurants in Budapest,
throughout Hungary, and with
slight national variations in many other
countries of Europe.

You ask for Gulyas - Hungarian for Herdsman.

Heat up a couple of tablespoons of oil or lard in a heavy pot and braise 2 medium chopped up onions
until they are a nice golden brown, -
then add two cups of beef cubes, stirring a bit until they become brown.

Add 2 cloves of garlic, 2 diced carrots, 1 diced parsnip, a couple of celery leaves
and 2 or 3 medium potatoes, sliced,
i tablespoon of Hungarian paprika and
a teaspoon of caraway seed.
along with one bay leaf. some ground black pepper and salt to taste.

When the vegetables and meat are almost done add 2 medium tomatoes,
peeled and chopped and the sliced green peppers.
Let it cook on low heat for another few minutes.

If you want to be really Classical here is where you
bring the mixture to a boil and add the CSIPETKE, or
small Hungarian noodles. 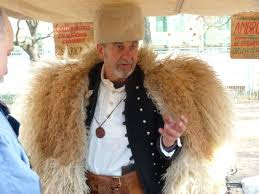 A Hungarian Herdsman in Traditional Finery

Here is a Hungarian Folk Song and some scenes that will perhaps
give you a taste of Hungary and its culture.

For more interesting Gs click here at ABC Wednesday,
with thanks to Roger, Denise, Leslie and
all grand helpers.
Posted by Hildred at 7:41 PM

The American version is what both Bill and I grew up with and what we fed our kids on (especially the day before payday ;>)).... I don't cook that way any more, but this post made me hungry for that comfort food. The "Real' version sounds very good (and much harder).

I used to work with a Hungarian lady who cooked us all Goulash on her last day at work. The recipe was similar to your traditional one, though I think there was rather more celery involved. We didn't leave much of it. I enjoyed the music too, very reminiscent of the band Muzsikas whom I like very much.

Goulash is one of my favourite dishes.I like the music you added in your post.
Thanks for your comment. I agree with you that gratitude is a much better word than greed and gluttony.

What an interesting post Hildred. I shall be tempted to try that recipe once the wintry days arrive.

This sounds delightful and much like a conglomeration I used to make called "Glop". Not a pretty name but it sure tasted good.

I love Goulash, though it is a dish I make more in the colder months.

I used to make a veggie version years ago although I am sure the Hungarian herdsman would disapprove:). I like his outfit.

I'm sure it's delicious