Roses I have known and loved...

The letter R for Roses

Life is not a bowl of cherries, - it has been a garden full of roses for me
during the last seventy years
(Thursday would have been our 71st Anniversary and the  start of my romance with roses.
Charles sailed into New York harbour on the 1st of May 1945,  with bands playing
to welcome those aboard home from overseas.  We were married on the 12th of May.
And it was Mother's Day week-end and wartime, - no flowers to be had.
My boss, the City Architect, knew people who knew other people,
and we had a full array of beautiful roses). 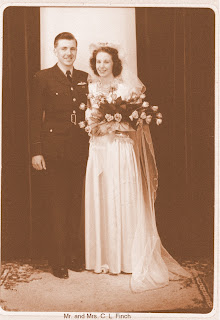 In those early years when we moved to the Cawston Bench, planted an orchard out on the sage brush and Charles built a house we planted Blaze roses outside our bedroom window.  Those were the roses dear to his childhood that bloomed along the back verandah on the 'old place' where he grew up, - the ones he used to pluck to put in his lapel on date nights, when he was young. 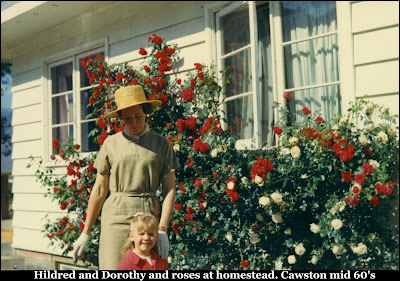 Our youngest daughter with me, before church one Sunday in the Sixties,
and the Blaze roses.....

When we left the farm and moved to 10th Avenue we went a little garden crazy....

wherever there was a fence there were roses and the Blaze still climbed
the wall below our bedrooom window! 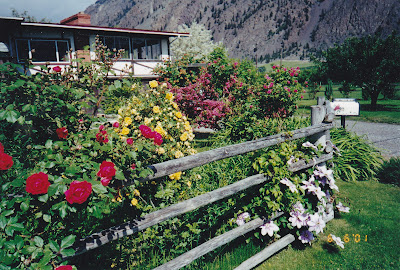 Charles sent away for thirty different varieties and planted them along the dividing fence, where they
bloomed heartily and kept us busy keeping the grass from around the roots. 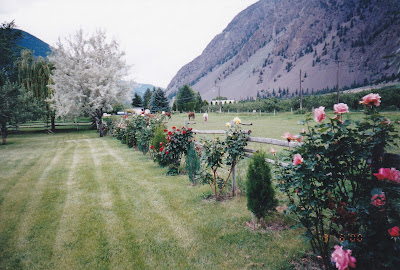 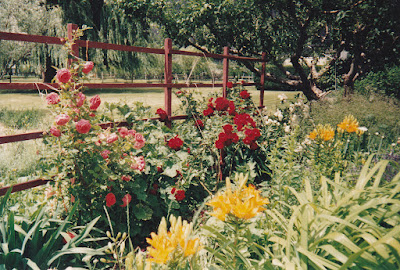 What a lovely twenty years we spent there....but then we moved to the Hillside
and were faced with the delightful challenge of a new garden to be
created from naught....

First of all - the roses.  It is where I discovered the Abraham Darby 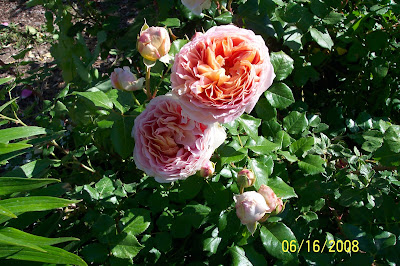 and the Prairie Princess, and the Mister Lincoln 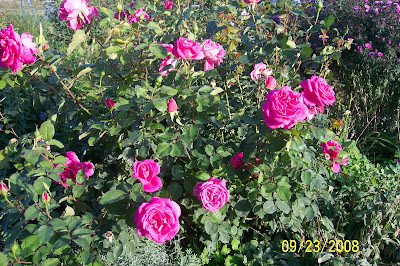 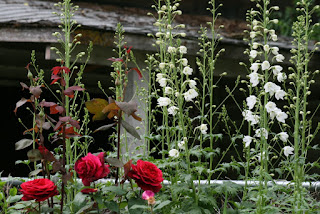 Here in town the lovely cabbage roses at the garden gate are just starting
to bloom, accompanied by the purple clemantis... 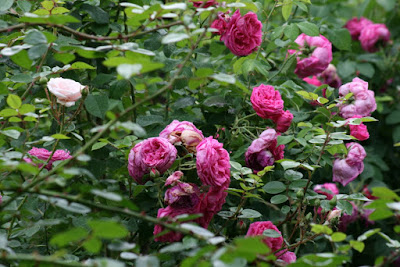 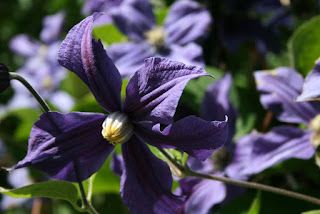 but out in the back garden, climbing over the garden shed, the Blaze
still holds place of prominence in my heart and
in my memory. 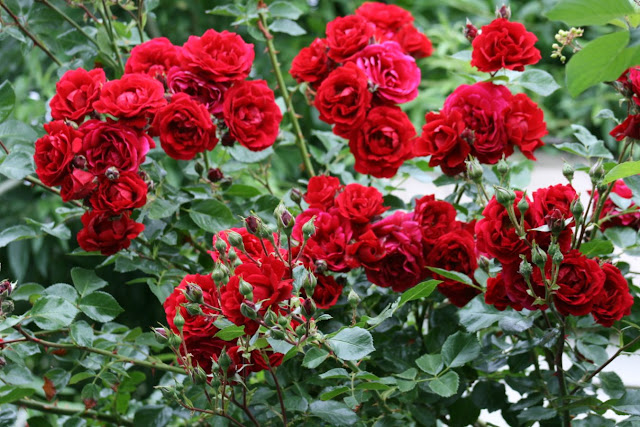 For more interesting Rs click here to visit with Roger and Denise
at ABC Wednesday - and all their Robust helpers.

What an endearing post, so much love in it, it moves me in a fine, but little sad, way
And i can;t helpt wondering... how old you must be... maybe i've asked you before and i forgot, sorry if that is the case.. but still wondering ;-)

Such beautiful memories and beautiful roses too.
You have so many varieties but the Faithful Blaze will always be the favorite for you I'm sure.

Thank you Melody, - don't think you've asked before how old I am (as old as dirt!!) I was 91 this past January, but have good health and a wonderful family of six children who all miss their Father almost as much as I do!

I have been feeling very nostalgic about gardens of the past, attempting to express some thoughts without going completely awash in sentimentality.
This is a beautifully expressed tribute, both to your long marriage and to the roses that have marked each home you made.
We drove by a house this weekend with red roses spilling over the entrance and Jim remarked on them.
I told him they must be Blaze--I don't think there's any quite comparable.

Sometimes I just fall into a slough of sentimentality and let the chips fall where they may. (to Morning's Minion, whose posts I enjoy so much)

The roses bookmark your life so beautifully!
From the Handsome groom with his beaming bride to the delicate Cabbage roses adorning your current gate,every bit of memory and each petal are just lovely.
I try not to wallow in sentiment either but this post is SO well written and wraps the reader up in rose scented nostalgia.

Lovely roses, lovely memories. I don't much like cherries anyway.

Such a lovely post, roses are my favorite flower.

Oh, Hildred you have had a great and long life. I like the story about the roses. Thank you for the roses!
Thank you for your comment! Did you know that an aunt of our king was born in Canada?
ABCW Team.
Wil,

Yes, I did know that Wil, - and we were proud to have Royalty from the Netherlands in Canada during WW2.

Beautiful roses, beautiful memories! I love this post so much. My dad (also named Charles) loved roses so much and was so proud of the borders and gardens he created. This brought happy memories to me too.

I can almost smell them, Hildred. I see Delphinium in one photo, too. My mother had a love affair with roses. People would stop their cars at her property to admire the rose gardens. I know you were thinking of Charles on May 12 - you had such a long life together. I've been away several weeks at the beach, so it's good to catch up with you. I hope you're feeling well and tending the garden.