I is for Ibis

The letter is I for Ibis 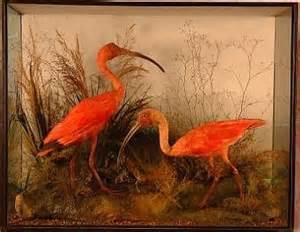 "Every one has heard of the Ibis,
the bird to which the ancient Egyptians paid religious worship;
which they brought up in the interior of their temples,
which they allowed to stray unharmed through their cities,
and whose murderer, even though involuntary, was punished by death;
which they embalmed with as much care as their own parents." 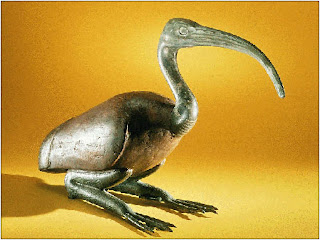 This most ancient of birds has survived plentifully in some areas of the planet,
to the extent that they are sometimes referred to as 'chickens'
so common have they become.

However, in China the crested Ibis is considered an endangered species
and every effort is made to protect them.
(seen in the lower right hand corner)

Can you guess which one is the Glossy Ibis?
The lower left hand bird is the Sacred African
and the upper left the Australian Ibis. 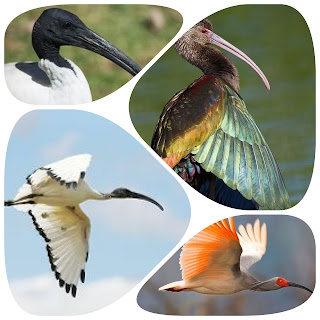 An excellent article on the Ibis can be found here at 10000 Birds -
far too much fascinating information  to
include in this small blog.

If you are interested in poetry based on the Ibis, Susan Hahn has written
a lovely eighty page widely acclaimed book....

More interesting Is here at ABC Wednesday with thanks to
Roger, Denise and all Invigorated helpers.

I am going to look on line for thatpoetry book Hildred, as our Poetry meeting is coming at the end of the month.

I would have sent you a picture of an Ibis or two (or two hundred), but they would be quite plain compared to those gorgeous scarlet ones. We occasionally see glossy ones, or white-faced ones, but the ones we see every day everywhere are just plain white.

Wonderful choice, i love birdsso you always can treat me with posts about them ;-)

I only saw white ibis in Egypt.They were beautiful, but the coloured ones must have been very beautiful.
Thanks for sharing.
Wil, ABCWTeam

You are right, I've heard of the Ibis, but outside of books have never seen one. Maybe because they don't like cold BC winters. - Margy