The letter is T for Terrace, B.C. 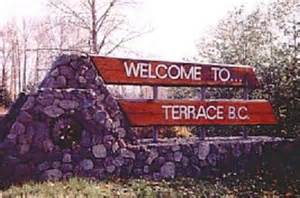 Terrace lies in the beautiful Skeena River Valley amidst the Coast mountain Range and was named for the natural terraces cut by the Skeena River over the past centuries. 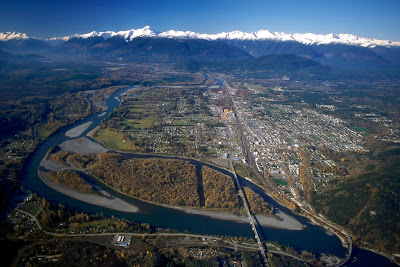 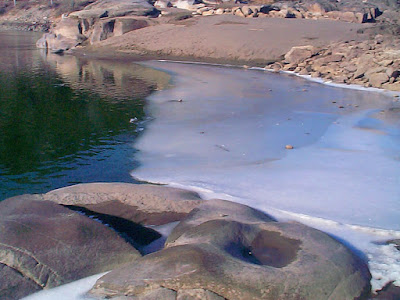 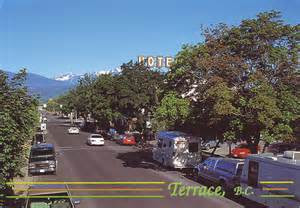 It is literally a city built within a forest, surrounded by National Parks with
endless tracts of trees, sweet mountain air, hanging valleys and beautiful lakes. 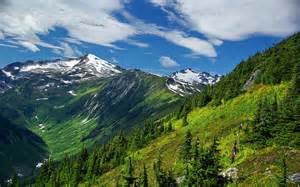 The First Nation people of Terrace are one of North America's oldest populations
still occupying the same land as their ancestors did.
There are a number of First Nation villages in northwestern B.C.,
and closest to the city of Terrace
is the Kitselas and Kitsumkallum, occupied by the Tsimshian people. 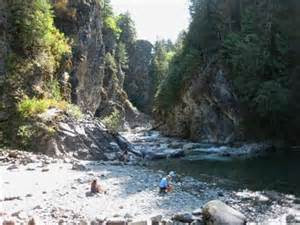 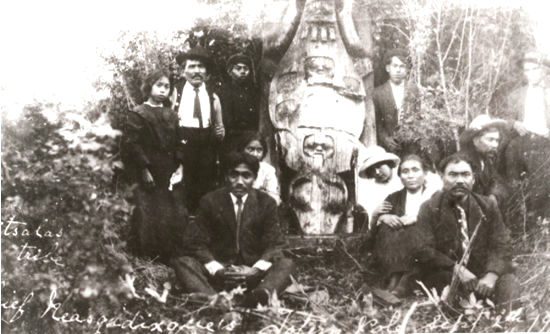 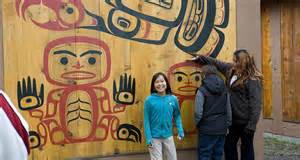 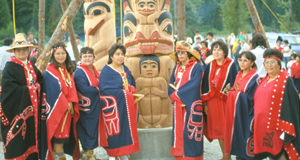 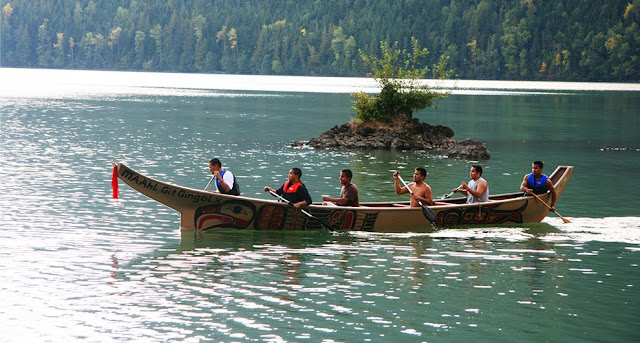 an Indian canoe on the lake

The west Coast of British Columbia abounds in Totem poles, - in Stanley Park,
Vancouver, in northern villages and the island of Haida Quai 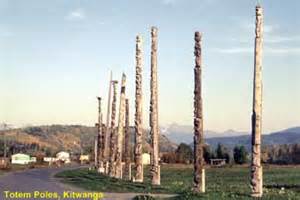 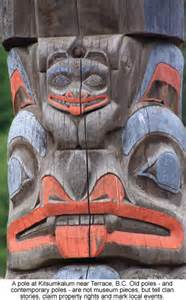 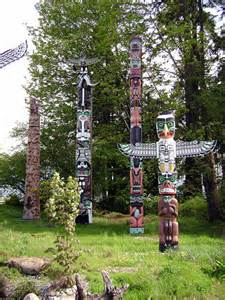 Originally called Eby's Landing Terraxce began in 1901 as a telegraph station on the Dominion Telegraph Line, and in 1905 was a port of call for sternwheelers pllying the Skeen River, establishing the town's important role in future transportation in the Skeena River Valley. 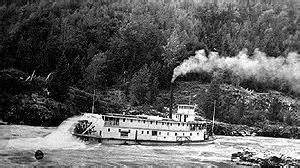 George Little, the founding father of the town, tired of the Gold Rush and settled in Terrace in 1905, built a sawmill in 1911, and established the area economically.  Today
the forest continues to provide the mainstay of the area.

Terrace is home to "Ursus americanus "kermodei", the rare white Kermode Bear, and this statue in the town is dedicated to the "Spirit Bear", honouring the traditional legend that the spirits of these bears help humans in distress and protect then from evil spirits.The Kermode bear is a pale colour form of the black bear, and it is protected by law in B.C.

The area abounds in wildlife

Grizzlies,(there is a Sanctuary) wolves, cougar, black bears, bald eagles
and is a wonderfully inviting spot for fishermen. 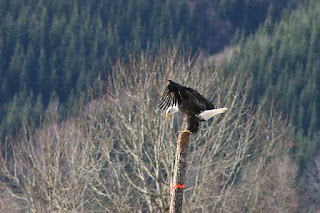 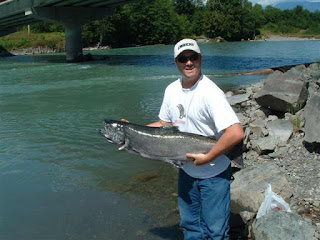 The town has a renowned Farmer's Market, a golf course, many hiking and biking trails through  forest stands of Sitka spruce and Western Red Cedar, an Art Gallery, beaches and  interesting Heritage Buildings at the Terrace Heritage Park
representing the distinct aspect of pioneer life.

How will you get there? 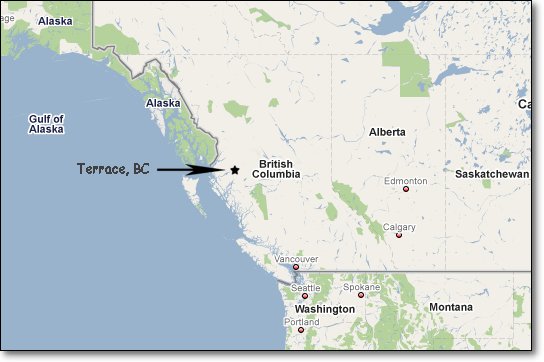 A wonderful part of British Columbia to explore.

Lots more interesting Ts here, at ABC Wednesday, and many
thanks to all who make this great meme available
week by week.
Posted by Hildred at 10:56 AM

Wow! Thank you for sharing these breathtaking photographs, and for the interesting facts you wrote as well. Blessings!

What an interesting and picturesque place.

Terrace began around the same time as Powell River. Sounds like you have a nice town with interesting things to come and see. - Margy

We learn to know Canada better and better, and I learn to see how interesting and beautiful it is. Thank you!
Wil, ABCWTeam

And what i need to say .... every time i see logs like this, but also on tv... those signs with names of towns etc are truly amazing....
Overhere in The Netherlands they're not there...

Hello Hildred,
A lovely piece of writing and delightful pictures of The Terrace,
in the Skeena River Valley.
I have thoroughly enjoyed reading about it.
I, too, would love to visit Canada, alas health issue disallow me
from travelling beyond EU countries, as I wouldn't qualify for
Insurance.
I have strong ties with Canada as my first husband's family,
The Christiansons' live in between
Edmonton and Calgary, they are Ranchers.
Our youngest daughter Astrid, and her father, visited them on the
ranch not long before he died.
Some of the family came over to Astrid's
wedding, 3 years ago It was lovely to meet them.
We were invited to stay
with them for a holiday.
I so would love to visit your glorious country.

Thank you for sharing it with us,
Best wishes,
Di.
ABCW team.

I grew up in Edmonton, and all the rest of my parents family lived in Calgary, so I know the area. Beautiful country, - winters can be challenging, but the wide sky and the sunshine make everything sparkle, even when it is so cold. We have Christiansons in the Similkameen and they have family on the prairies, - could it be???? I am sorry that your health keeps you from traveling, Di - it is not my health but my age that keeps me close to home!

"sweet mountain air" is a wonderfully evocative phrase. The name Kermode I think is celtic, I wonder how it got its name.

What a gorgeous place to explore!