The letter is T for Trombone and Trombonists 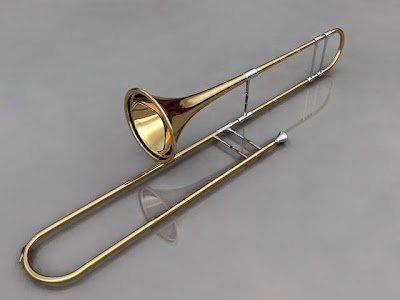 A little history and a little music!

The trombone is not often heard as a solo instrument, but many legendary performers have left their marks on the history of jazz, tracing the line from Miff Mole and Kid Ory through Jack Teagarden, Tommy Dorsey and on to Bennie Green and now today's original sounding trombonists, like Ray Anderson and Craig Harris.

In the early 1900s to the 1920s Dixieland, primarily improvised music with the trombonist playing a countermelody to the cornet with glissandos and other raucous effects that could be produced with the slide trombone.

Most well known of these 'tailgate' trombonists were Edward "Kid" Ory and Irving Milfred "Miff" Mole, with Miff being perhaps more technical and with a brighter sound, avoiding the glissandos and growls that Ory favoured.  Miff's composition "There'll come a Time" (Wait and See) can be heard in the modern release of 'The Strange Case of Benjamin Button' (which I thoroughly enjoyed) 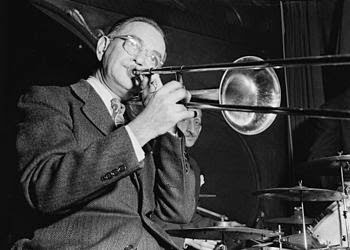 As the thirties wore on there was a new trend in jazz trombone, known as Swing, and it differed from Dixieland in several ways, the most obvious being in the greater number of musicians performing
in a band, and in the tendency to arrange the music prior to the performance, so that improvisation was eliminated.

Trombonists enjoyed a prominent role in the jazz ensemble of the swing era and were often featured as soloists.  One such trombonist was Jack Teagarden who developed a lighter and smoother tone, possessing a fluidity that many other trombonists tried to imitate. 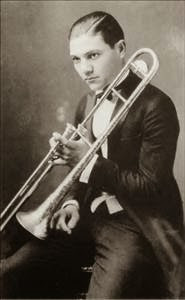 Tommy Dorsey, who was to become one of the most popular trombonists of the swing era, so respected Teagarden's playing that he refused to play a solo while Teagarden was in the same room. 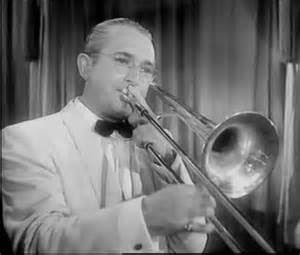 In the early 1940's a new style of jazz began to develop, known as Behop.
Prior to Behop jazz style were performed for dancing, but now jazz was being written and performed for its own sake, with smaller combos allowing more freedom than was possible in a big band.

Bennie Green was perhaps the first trombonist to play in the Behop style.  His music possessed a warm and smooth tone, influenced by trumpeters Charlie Parker and Dizzy Gillespie
with whom he played. 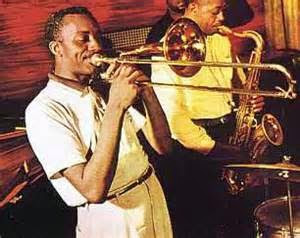 A little music to illustrate the lovely sounds of the trombone!

For more Ts - visit here at ABC Wednesday,
with thanks to Roger, Denise and the visiting crew.
Posted by Hildred at 11:42 AM

I enjoyed this post Hildred! Listened to the trombone music for a while while reading your sidebar posts and gazing at your lovely header. I wish I knew how to put the music into the background so I could keep listening to it as I looked at other blogs.

I remember being fascinated by the trombone player I saw in a marching band when I was very young. you've found some great examples of the trombonists art.

I love the sound of brass bands and particularly a well tuned trombone.
It always brings to mind the old musical with Robert Preston 'The Music Man', where he leads the local band sing 76 Trombones... all good stuff.

You had me at glissando...

I love that kind of swingy music which you call bebop, and I like the music Miff Mole plays. Fantastic instrument is the trombone!
Thanks for these beautiful videos.
Wil, ABCW Team

A most enjoyable musical interlude. I'd never heard of the wonderfully named Miff Mole and the Little Molers before, wow that is some smooth trombone playing.

When I was young, my uncle was in a marching band, he had a trombone, and he left us kids blow it. We couldn't make any music.

I have heard music from this instrument and it is pleasant.

Interesting history Hildred - I really loved that story about Tommy Dorsey refusing to play when the man he thought was a genius on the instrument was in the room.