The letter is J

I JOG your memory with a bit about JIGGS and Maggie and some of the information Mr. Wikipedia provides, and some of my own remembrances about this cartoon that ran in the local paper all the days of my youth - and beyond!! 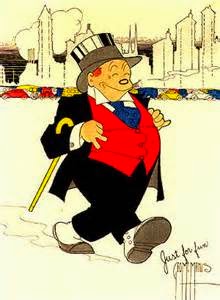 Particularly relevent as I write on St. Patrick's Day, and Jiggs was a typical Irish Shanty immigrant, a former hod carrier who won a Million Dollars in the Irish Sweep Stakes, but clung desperately to his old life and his old friends at Dinty Moore's Tavern, despite the social ambitions of his harridan wife, Maggie!

Younger enthusiasts will remember Jiggs and Maggie as the inspiration for the movie "Bringing up Father". 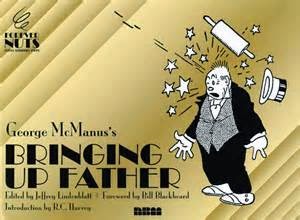 "The strip deals with 'lace-curtain Irish', with Maggie as the middle-class American desiring assimilation into mainstream society, in counterpoint to an older, more raffish "shanty Irish" sensibility represented by Jiggs". 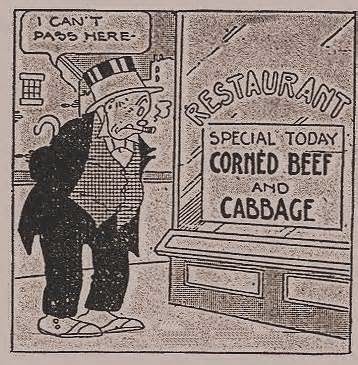 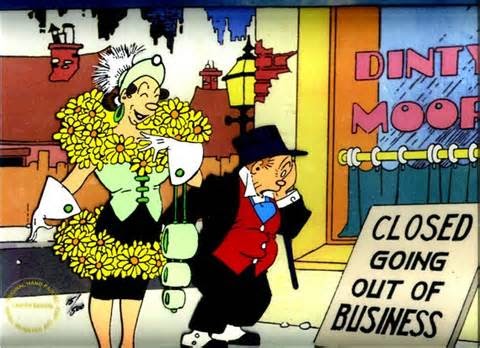 Through the character of JIGGS McManus' humour gave voice to the anxieties and aspirations of Irish Catholic ethnics during the early 20th century, and took the middle position in the conflicts over assimilation and social mobility which aided readers in becoming accepted in American society without losing their identity.

Jiggs and Maggie was a great success and made McManus a rich man. He generally drew his characters with circles for eyes, and had a bold, clean-cut cartooning line.  'His strong sense of composition and Art Deco design made the strip a stand-out' (Wikipedia).

Do you remember Maggie with her rolling pin, and Jiggs with his fondness for corned beef and cabbage!!!! 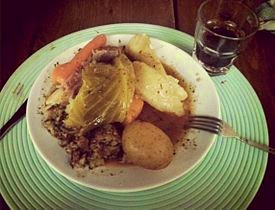 If you want to make your own Jigg's dinner put a four pound (or thereabouts) corned beef brisket into 3 cups of broth (and water to cover) into a Dutch Oven.  Add one large onion cut into six or eight wedges, and a medium clove of garlic, minced.  Bring to a boil and then simmer for two hours.  Remove the corned beef to a platter, cover with foil and keep warm.

Skim the fat from the broth and add about six potatoes, peeled and quartered, four large carrots, halved and cut into three inch lengths, one small head of cabbage, cored and cut into six to eight wedges and one medium turnip, cut into two inch chunks. Cook until vegetables are tender.

Slice the corned beef and serve with veggies.

Pretend you're Jiggs, or Maggie, - sitting down to a traditional Sunday dinner in Irish America and enjoy!

More Js here at ABC Wednesday, with thanks to Denise and Roger and all jolly helpers.

This cartoon character is obviously a native Canadian one Hildred as I have never heard of him over here. But isn't it interesting how these cartoon characters become part of our lives when we are children?

Thank you for JOGGING my memory of this comic strip. How much fun it was to see it in color on Sundays! For those younger, color print was not used in the daily papers. And thanks for the background of the characters.

I love cartoons, Hildred! Thanks for sharing these with us!
I hope you'll have a great week!
Wil, ABCW

Hello Hildred,
I did enjoy reading about JIGGS
although I hadn't heard of him before you wrote about him!
We used to visit an aunt in Dublin and they always talked of winning the Irish Sweepstake. My aunt often served boiled beef and cabbage also boiled bacon and cabbage. I can't say I enjoyed those dishes then, but now I sometimes do a brisket pot roast or use a sheet of bacon ribs to make lentil and ham soup. Corned beef comes in tins and is used to make corned beef hash, which is an inexpensive hearty meal.
As I live in Liverpool there's a bit of the 'Oirish', in all of us...so 'Top of the morning to you' and Happy St Patricks day to you all !
Best wishes.
Di.
ABCW team.

My goodness, I DO remember that strip in the Sunday paper when I was growing up. You brought some context to the peculiar narrative that was Bringing Up Father.

I love the illustrations and the comic sounds interesting. Hadn't heard of it earlier.

Oh I absolutely loved the funny papers as a kid and remember Jiggs and Maggie very well. I think they had a tall beautiful daughter too...

I didn't of course understand all the sociological background as a kid and so that was very interesting to read and think about. I don't remember the strip being in the paper once I was grown. (And I have always read the funnies and still do. Which I think probably makes me one of a dying breed.)

I remember Jiggs. I thought he was adorable and Maggie a shrew, even though I had no idea of the word back then. :-)
The View from the Top of the Ladder