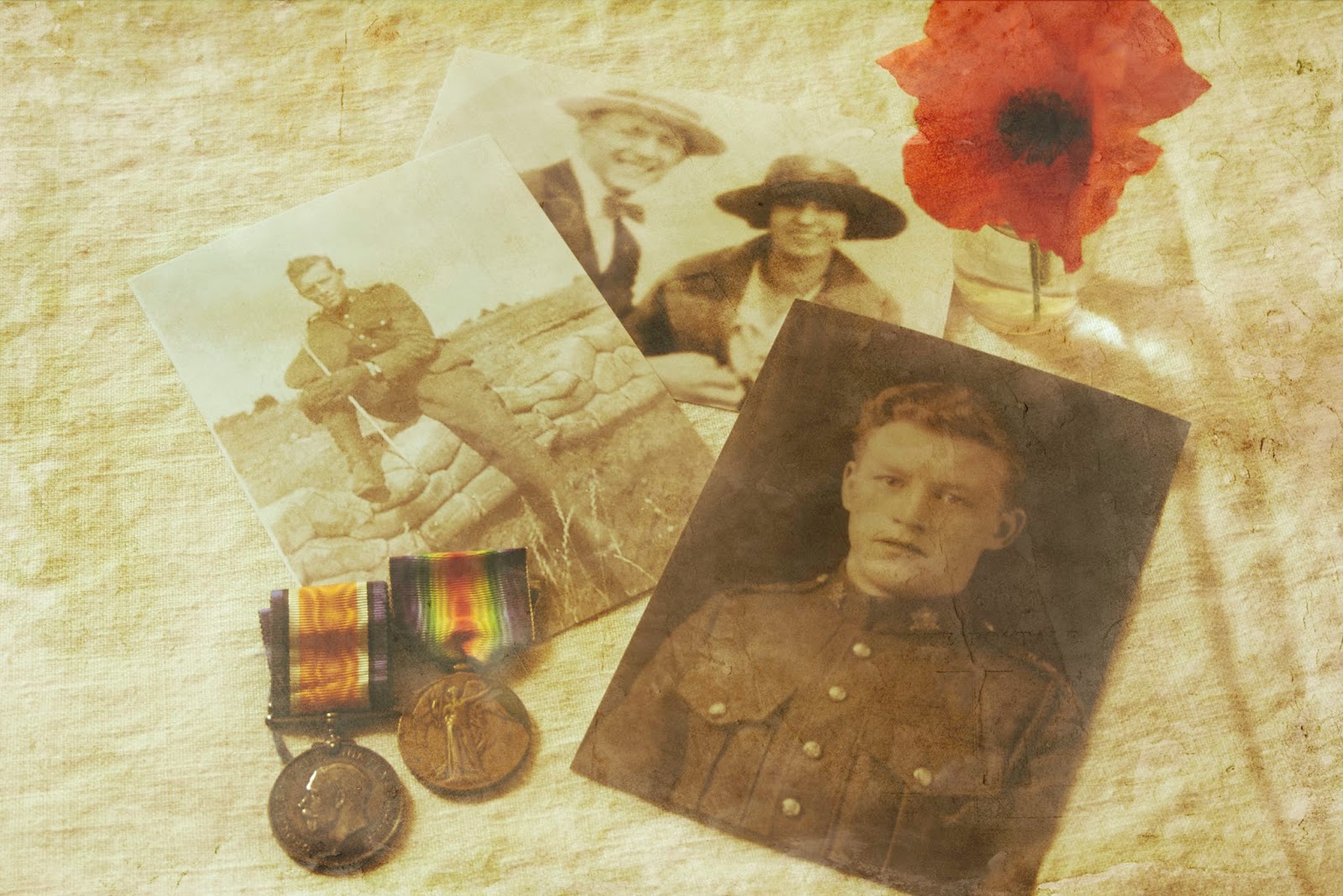 My father - a young private in the First World War,
and a snap of he and my mother, courting, at war's end.

This morning at 11 o'clock I will go to the Cenotaph, where the Royal Canadian Legion will be holding a ceremony in remembrance of that sad day in August one hundred years ago when war was declared and the world was plunged into turmoil and devastation.

In sorrow I acknowledge that we haven't learned very much yet about settling differences and dealing with terrorists - and how do you deal with terrorists who harbour hatred and are prepared to sacrifice even their own to achieve their frightening ends????  Probably love is the answer,
if we could just unlock its secrets about how to make it trump ego.

I will remember my father, who at 17 joined the Canadian Expeditionary Force and was wounded at Cambrai, just a month before the war ended in 1918.  He bore the scars of his wound and twenty years later a return of the osteomylitis that had so badly infected his body and now resulted in another
year in hospital and the stiffening of his leg.

The History of the 191st Battalion gives an account of the second battle for Cambrai (Oct. 11th, 1918)

My father was with the 31st Battalion, attached to the 191st, and they waited in their assembly position for the battle to begin at 9:00 a.m. and the Brigade to move.

"No sooner had the advance commenced, however, than German artillery observers, watching the lines of infantry as they moved forward, signaled their batteries, and within a few minutes a devastating barrage had been brought down upon the Canadian formations.

The 31st Battalion...came in for a terrific shelling with gas and high explosives......For a time hell was loose among the men of Alberta.  The shells, as they fell, detonated off the trees that covered the Battalion's assembly area, and the wounds caused by the flying shell splinters were terrible.  Enemy machine-gunners, realizing the Regiment was being cut up, poured belt after belt of machine-gun  bullets into the area;  and the deafening crash of bursting shells, the rending of riven timber and the continual stammer of the machine guns combined in an inferno of din sufficient to strike terror into the heart of the bravest.

To the lasting credit of the 31st Battalion it must be recorded that this terrible punishment at the very start of the day's operations produced  neither panic nor confusion, nor did it in any way deter officers and men from proceeding to carry out their allotted tasks in the day's campaign". (from the History of the 191st Battalion)

This is the battle in which my father was wounded, - a wound he suffered from
but seldom mentioned.

My children knew him as a loving tender grandfather, who walked with a limp and a cane
for the rest of his life. 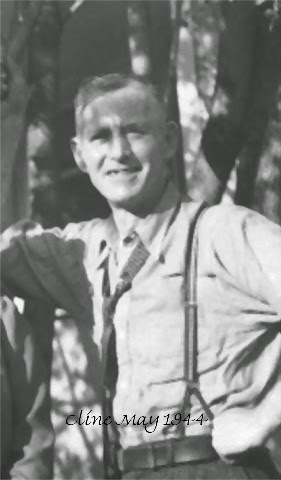 When I come home I will post some pictures of this community's remembrance of the unbelievable number of young men who gave either a part of their lives in the mud and trenches of France or made the ultimate sacrifice with such honour.

Not an overwhelming turnout, but a reverent one. 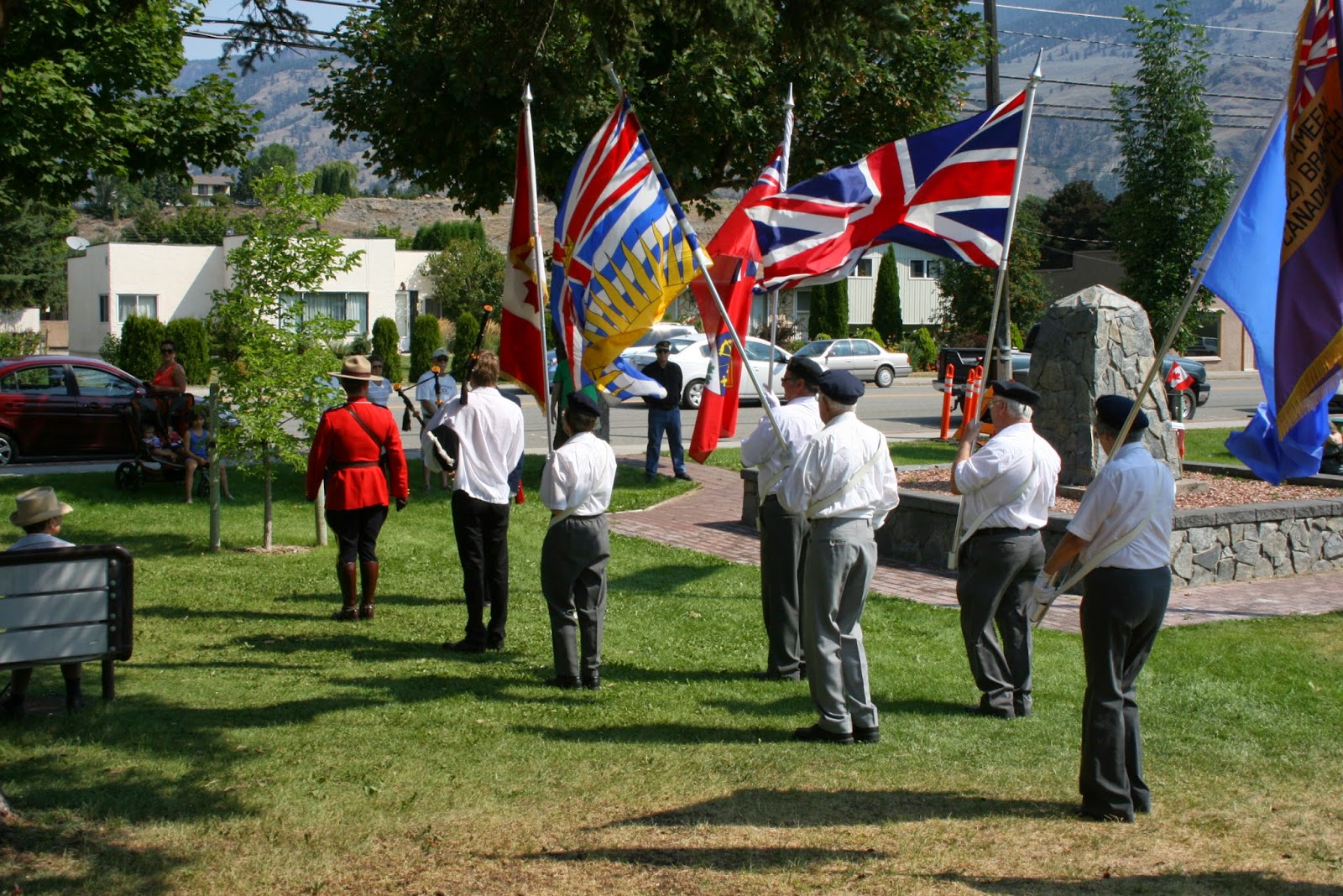 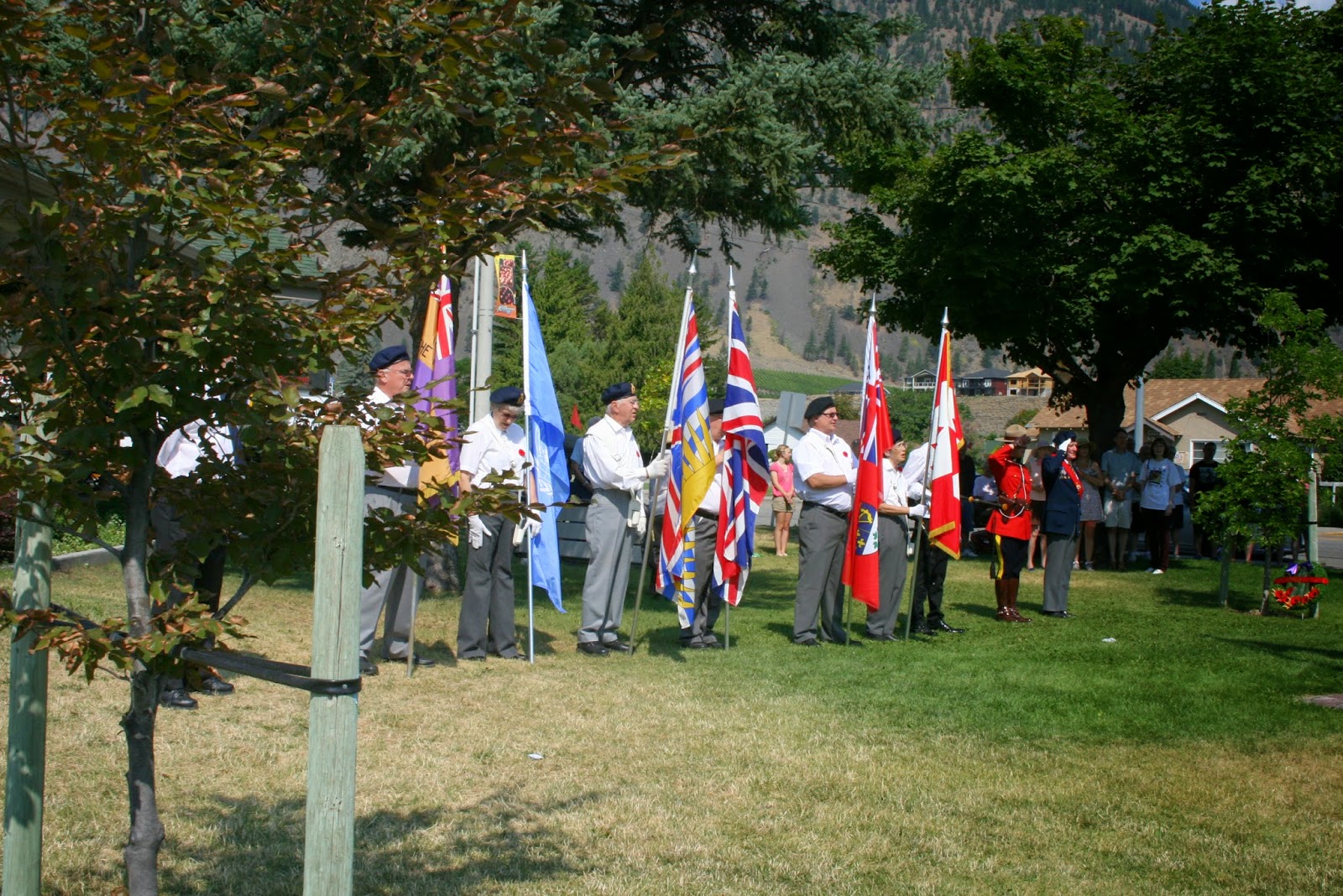 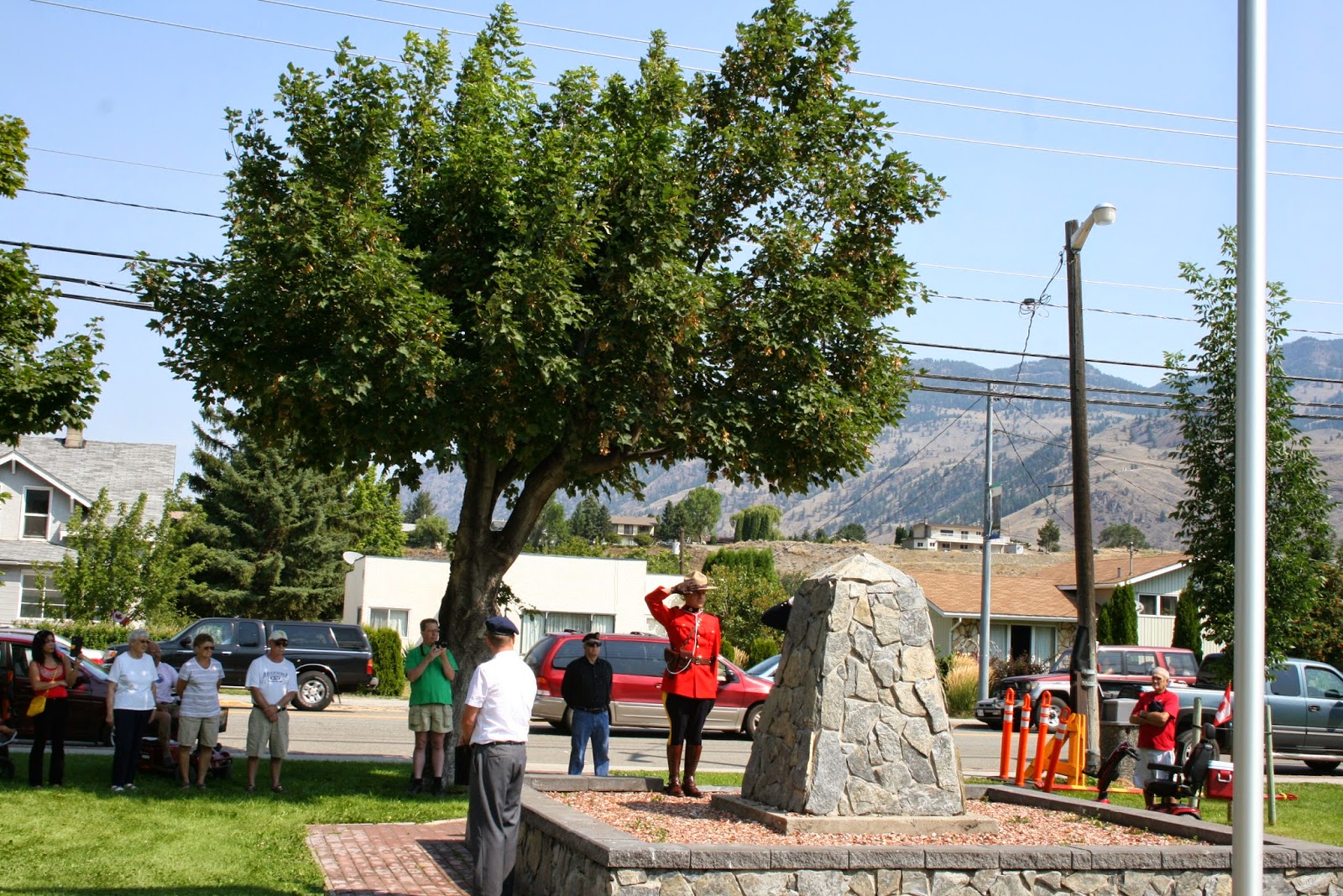 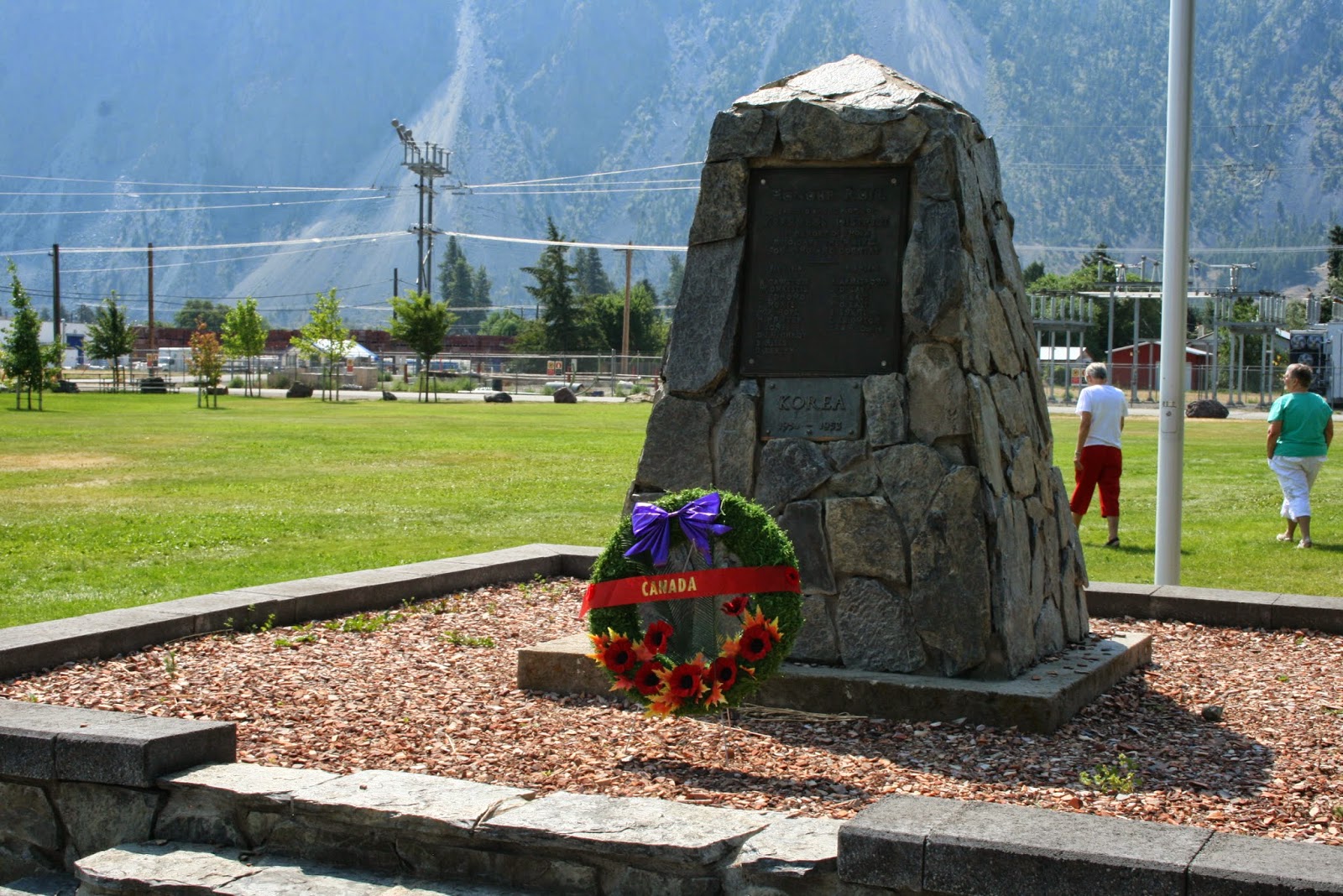 And there was a piper!!

Thank you for this tribute to the heroes who fought for a better world! Like you I am disappointed that the world has not learned to keep the peace, and make the world better.
Interesting to hear that a cousin of yours inspired the poet to write the poem of the poppies in Flanders.
Today I heard that the last man, who died several minutes before the peace treaty was signed om 11th November 1918,was a Canadian.

Thank you, Hildred, for sharing this. I followed the links to your posts about your parents, then landed on the 'back pasture' blog--quite forgot that I was meant to be watching the gauge on the pressure cooker. [I did remember in time to avert a catastrophe!]
My g-uncle, Lawrence Ross, was killed on 1 August, 1918 in the second Battle of the Marne. My mother, born 9 months after his death, always spoke as though she had known him. I think that personal stories do a great deal to keep memory vital.

Lovely post Hildred. It doesn't need many people there - the important thing is to remember. We just put all our lights out here on the farm at 10pm and lit a candle to burn in one window.

A very fitting tribute to so many brave men and women, and especially to your own dear father.

A lovely tribute post and I am sorry to be late in reading it. But any and every day of the year is a day we should remember our heroes and honor them.

And like you I wonder why we do not learn.