B is for Blueberries

The letter is B which stands for Blueberry 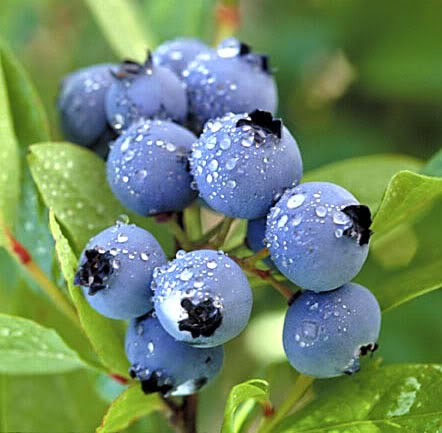 That beautiful berry that grows so prolificly here in the Similkameen but most especially
in the Fraser Valley in British Columbia.

The stores and fruit stands of  the valley are awash with blue these days, and I have my own stash safely in the freezer, frozen on trays so that when I pour them into small bags they rattle around on their own, rather than making a great icy clump that presents me with problems when I go to add a few to my morning cereal.

I have a lovely recipe for you today.  I haven't tried it, but the thoughts of hot, hot days, company coming and the prospects of preparing a sweet for dessert immediately make me think
this would be a perfect choice!!


It is called 'Berry Bliss Pudding' 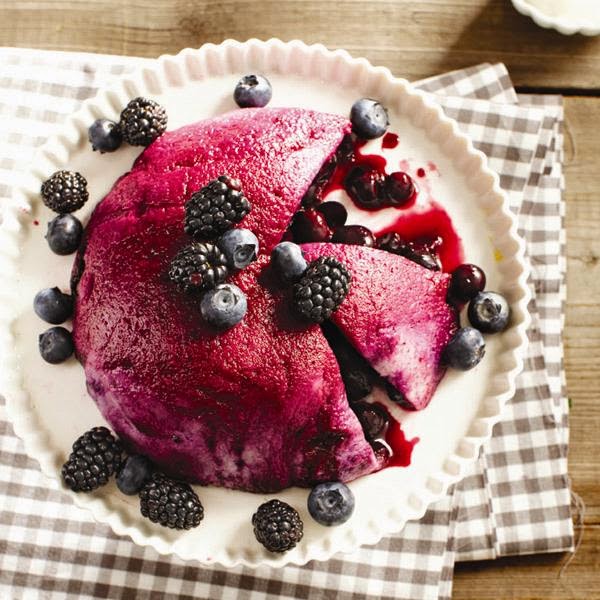 Combine three and one half cups of blueberries with a third of a cup of sugar, two teaspoons of lemon zest and two tablespoons of lemon juice.  Set over medium heat and bring to a boil, cooking until the berries begin to let off their juices but still retain their shape, - probably about THREE minutes.  Drain and reserve the juice.

Line a three cup capacity bowl with plastic wrap hanging over the sides.

Roll six slices of white sandwich bread (crust removed) with a rolling pin.  Dip each slice into the reserved juice and line the bowl with five pieces of bread, overlapping slightly.  Press the edges of the slices together so that THERE ARE NO GAPS.

Pour in the stewed fruit and cover the top with the remaining piece of bread.

Wrap the top with the overhanging plastic wrap, then press down again.  Place a small plate on the top and weigh it down with a large can of beans or tomatoes.  Refrigerate until the pudding is firm, at least forty minutes. (If you are clever you can make this the day before and refrigerate until ready to serve)

Now you can remove the can and plate, turn the pudding upside down on to a serving dish.  Garnish with fresh berries, slice and serve with yogurt, or ice cream or whipped cream, - whatever your heart desires.

What could be easier on a warm summer's day - well, Jello maybe, but it does lack a bit of savoir faire.


For more great Bs visit here at ABC Wednesday, with thanks to Denise and Roger and all helpers.
Posted by Hildred at 9:42 AM

I would love to taste this preparation.

Thanks for the detailed instructions, it now sounds easy to make.

not only tasty but good for you!
ROG, ABCW

Great post for the letter B! Now my mouth is watering...

Blueberries in porridge, are a regular breakfast. Lovely b.

Blueberries in porridge, are a regular breakfast. Lovely b.

BC blueberries are the best! I just happen to be having some today in my smoothie. But I wish I was actually in BC picking blueberries like my grandparents used to do. It's a little too hot down here in Texas now - hence the blueberry smoothie lunch to keep me cool :)

Blueberries are very popular here too!
Thanks Hildred!
We have been travelling for two days now. I am so t ired, but want. to greet. y ou anyway .Wil, ABCW Team

I've been following the experts' medical advice ever since they told me both blueberries and dark chocolate are good for me...

That's a Beautiful Blueberry shot you took, and that recipe does sound wonderful. Happy ABC Wednesday and Blessings!

Sounds like a blueberry version of a summer pudding, we make it with mulberries. Summer pudding is always a delight.

Blueberry pie is my favorite pie.This great berry is storehouse of anti oxidants.

We are picking blueberries here in Greensboro, too. But, we mostly eat them plain.

I so wanted to grow my own blueberries...but my plant did not survive the wineer and so now must buy a new plant♪ http://lauriekazmierczak.com/bumblebee-5/

It is a favourite pudding over here in the UK Hildred - we call it Summer Pudding.

I use blueberries in my smoothies and love them. The pie looks yummy.
ann

I should have known about Summer Pudding, Pat, - Penny told me that was what it was called in Australia, as well.

Yum! Makes me homesick for Oregon, where Cyndi said her blueberries are going like crazy and she wishes I were there to steal some (I will take them from her freezer when we get back!). I'll send her the recipe.

They actually have wild ones up here in Alaska. Our Denali guide told us that mosquitos fertilize them, because there are no bees. I am not sure I believe that.

We have a completely unexpected gift of internet service here in Deadhorse, where we are spending the night. So I decided to visit some of my favorite people!