The Letter is J, for Jelly Roll

When we were young and newly married we were part of a Veterans' community involved in establishing a new orchard project on the Cawston Bench, - the Fairview Heights Irrigation District.

Amongst our many friends was a War Bride from the United Kingdom who brought with her two great accomplishments;  the knack of gathering together friends for wonderful parties, (most of which eventually included a round of Knees Up Mother Brown),  and her elegant and delicate way with Jelly Rolls!  They were the star of most tea parties, and she was generous with the recipe, - which follows....

Lightly beat the egg yolks, gradually beating in 1/2 cup of the sugar.  Continue beating at a high speed until thick and very pale in colour.  Beat in water and vanilla.

Sift together the flour, baking powder and salt, folding it into the yolk mixture.  Set aside and wash beater thoroughly.

In a large bowl beat the egg whites with the cream of tartar until peaks form; gradually beat in the remaining sugar until stiff shiny peaks form.  Fold the yolk mixture into the egg whites with a rubber spatula, turn into a prepared 15x10 inch jelly roll pan lined with parchment or waxed paper.

Bake at 325 F for 25 minutes, or until the top springs back when lightly touched.

****sprinkle icing sugar over tea towel; invert cake on  top.  Remove paper and gently roll the cake in the tea towel from the long side......   Let it cool on a rack.

Unroll the cake when it is cool and spread with Lemon Curd.  Re-roll and dust with icing sugar....

Put it on your best plate and prepare for accolades....

****this is the delicate part 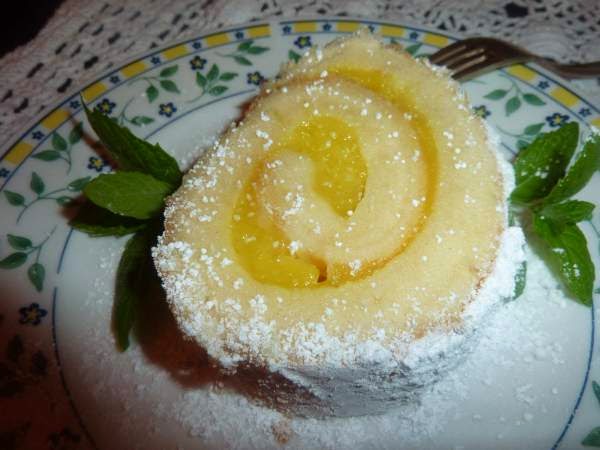 If you're going to make this for a party here's a little bonus to make things even gayer!

For more interpretations of the letter J join Denise and Roger and all their helpers
here at ABC Wednesday!

It looks delicious, thanks for the recipe!!

I have never heard of this before Hildred - I must say it looks delicious but can't say I fancy making it, it looks a bit of a chore to make.

Yummy, yummy! Thanks for the recipe and the fun video!
Have a great week, Hildred!
Wil, ABCW Team.

Ooh I say! That looks delicious, I shall have a go at that,
loved the vid too!

That looks so perfectly dainty and delicious.

I always think of Jelly Roll Morton, who was a great musician.

I always think of Jelly Roll Morton, who was a great musician.

it looks so delicious !

It looks simply scrumptious.
I don't think I have that much patience to create one.

My mother used to serve us jelly rolls for dessert quite often. She didn't make them herself, but did get a variety of flavours - lemon being her (& my) favourite!

The jelly roll looks delicious and delicate. Beautiful. The parties sound like even more fun. (I have an idea that the Muppets Version of Knees Up... might be cleaned up a bit from the original version!)