I turn my speakers to High in the morning, so I can hear its call, wherever I am in the house.

This morning I was close by for our youngest son's regular morning call from the Chilcotin - sometimes just a quick conversation, - how are you, what are you doing, love you, I'm off to check the water.....  sometimes a half hour goes by and we catch up on all the news, reminisce, laugh a little, tour around with his mobile camera.  The other day he took me up the hill with him to where the water originates (and gravitates) on this off-the-grid property - we see squirrels and eagles and deer and bears and humming birds and swallows.  I am in awe of the technology that allows this all to happen!!

Today was a busy mailing day on the Meadow, where our second son and daughter-in-law have created a unique and wonderful business, making and marketing Touch Wood Rings  (do go and visit, - you will be amazed and delighted).

So it was a quick call, - 'what are you going to do today'?  What will the answer be?

It is B.C. Day here, - the end of the 'August Long' as it has come to be known.  A frantic week-end in the middle of summer where towns vie for festivals and great crowds of people.  Here it was Kars Under the K - a vintage car show.  In Kelowna it was Centre of Gravity, a volley ball tournament that has grown into a gigantic and festive event, seducing even the RCMP anti gang task force to attend and warn gangsters (who also like the 'hottest beach festival in Canada') to behave!

I do not plan to leave my lovely quiet cool backyard, and am in the envious position of not having anything that demands my attention, but many things that entice me, so in answer to my son's question I could only say I would do today whatever draws my fancy first.........

I did think it was a great opportunity to catch up on my Kobo reading, so with the phone, a cup of coffee and Heather Lende's  'If you Lived Here I'd Know Your Name' Callie and I went down the hall, out through the sun porch and made ourselves comfortable on the blue bench out back.  Where we spent the WHOLE morning......

I expected this book to be a quick read about life in a small town (Haines, Alaska) but I found it to have much more depth, and I am only one-third  the way through it.

Twice this morning I have come across references to the importance of "acting on our beliefs without demeaning others who don't believe the same thing (we do)".(Lende)  Once in Lende's pages where she expands on this and refers to the possession of  an Annie Dillard book by a right-wing pilot whose politics did not agree with hers, and to an afternoon spent in the company of an American Legion Commander whom she found to be more humane and Liberal than I guess she expected a Legion veteran to be (my observation).

Earlier I had read in the regular morning letter that comes to me from 'The Center for Social Leadership'  an appeal for Americans to find a common ground amidst all the political parties and subdivisions in America today.  He urges communication, - informed communication that equips one to be a leader in expressing one's own opinions with conviction, but also with a mind open to other's beliefs.  He points out that all the freedoms of the American way of life are to be found in the Declaration of Independence where Jefferson wrote that "all men are...endowed by their Creator with certain unalienable rights" and that the proper role of government (which seems to be where all the controversial points of view originate) is only to secure these rights.

I must confess to not being as well informed about American politics or the Declaration of Independence as I could be (ironically the descendent of a number of Loyalists from New York State),  but the idea that Liberals and Conservatives could treat each other with open ears and with respect appeals to me !!!!!

Well, there.  That is really all I have to say about THAT and the day is only half over. So perhaps I will go and weave, now that I have threaded the heddles and the reed, tied the warp and the treadles and woven enough to draw me through the door and on to the loom bench where time just seems to melt away into pure pleasure. 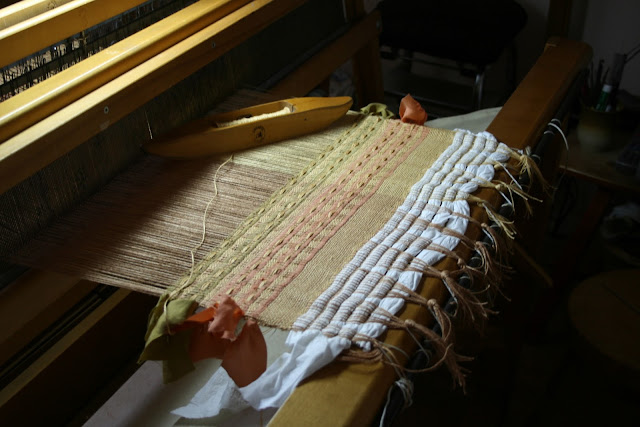 Great post... you are not letting any technological grass grow under your feet! Skype is a great way to keep in touch.

Heather Lende has a second book also worth reading, can't remember the name right now and didn't want to go look it up because I'd probably forget to come back and comment if I did. (When I click on Amazon I am lost for hours!) I wonder now if she has written anything else after that, so I will go find out.

Sadly, 'informed' communication seems to be a dying art in our politics. I wish it were otherwise.

my daughter and niece skyped this week!

I like the soft colors in that woven piece-in-progress.