A busy week, with Remembrance Day in the middle of it and it felt as if every tomorrow should have been Sunday. But it wasn't... Things have happened since Wednesday, - it has been a busy week. Late to be reporting on Remembrance Day, but important to me to to record it here, so please be patient.

It was a beautiful calm sunny day. Family who could came to help us remember our own dear ones who were taken in battle, and all of the others from this community whose names grace the Cenotaph. Others sent messages.

Here is Charles with another old Navy Vet, as he prepares to read the names of the Fallen. As he has done for many, many years. While I was shopping today someone remarked how much his participation is appreciated, and what a fine, commanding voice he had. At home, too, I commented! 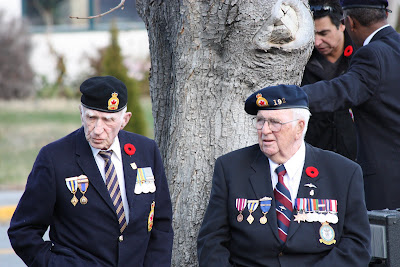 The parade marches on, led by the RCMP in their Scarlet Dress uniforms, the Colour Party, the Piper, followed by the Veterans, the members of the Legion, the Service organizations and the children, - the cubs and scouts and guides and brownies. 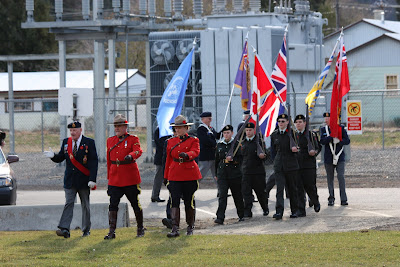 The Two Minutes of Silence. 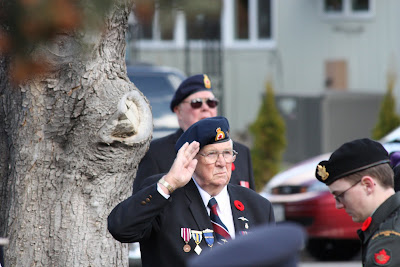 The laying of wreaths. 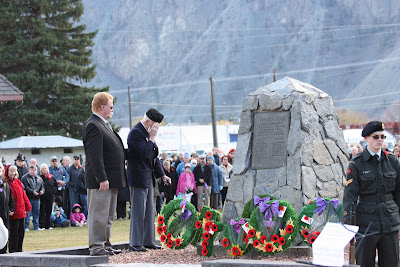 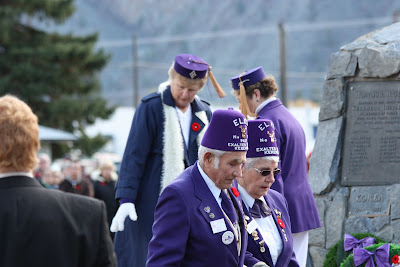 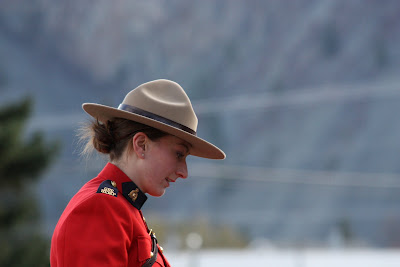 It is a solemn and reverent ceremony, one which remembers with sadness and gratitude, and in no way glorifies or romances the deadly adventures of War. Veterans are heartened by the people of the small towns of Canada who remember those who made it possible for them to live their tomorrows.

The parade marches off to gather at the Legion Hall with those who attended the ceremony - Hot Buttered Rum, Chili, Stew and Buns, singing old songs, laughing at old stories and a few reminiscences, although not as many as in the early years. 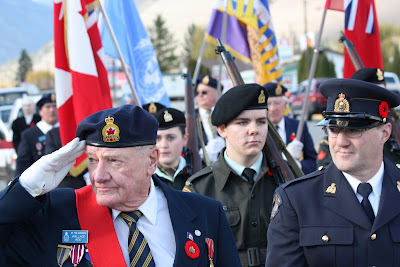 At home we talk with mixed emotions, listening to Charles' account of some of those far off days when life was tenuous for so many, and survival was fifty per cent luck and fifty per cent skill and experience, combined with a marvelous trust and dependence upon those who were as close as brothers to you in the battle. 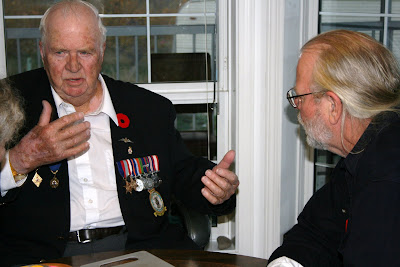 It is one day of Remembrance, and so soon, after a night's sleep, we waken to the realities of the present. But still, there lingers the words, -

"To you with failing hands we throw the Torch, be yours to hold it high
If ye break faith with us who die we shall not sleep,
Though poppies grow in Flanders Fields".

In Australia the young are attending Remeberance Services more and more. Thankyou for sharing those fantastic poignant photos.
I had a packet of very old poppies, flanders red ones, and just threw them in the vegie garden, well only one came up and it flowered on 11.11.09. Hmm pretty amazing..the seeds were over 7years old. So it is a very special poppy to me.