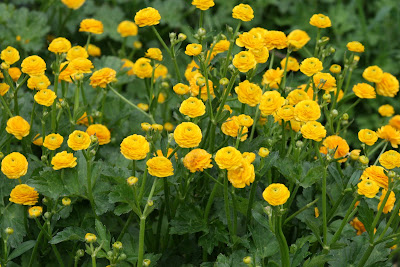 R is for Ranunculus 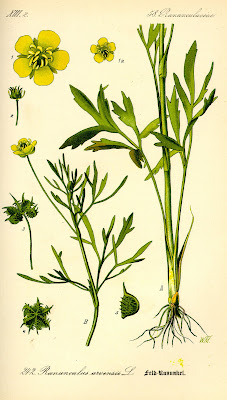 "Ranunculus (pronounced /ræˈnʌŋkjʊləs/)[1] is a large genus of about 400 species of plants in the Ranunculaceae. It includes the buttercups, spearworts, water crowfoots and the lesser celandine (but not the greater celandine of the poppy family Papaveraceae).
They are mostly herbaceous perennials with bright yellow or white flowers (if white, still with a yellow centre); some are annuals or biennials. A few have orange or red flowers and occasionally, as in R. auricomus, petals may be absent. The petals are often highly lustrous, especially in yellow species. Buttercups usually flower in April or May but flowers may be found throughout the summer especially where the plants are growing as opportunistic colonisers, as in the case of garden weeds.
The Water crowfoots (Ranunculus subgenus Batrachium), which grow in still or running water, are sometimes treated in a separate genus Batrachium. They have two different leaf types, thread-like leaves underwater and broader floating leaves although for some species, such as R. aquatilis, a third, intermediate leaf form occurs.
Ranunculus species are used as food plants by the larvae of some Lepidoptera species including Hebrew Character and Small Angle Shades. Some species are popular ornamental flowers in horticulture, with many cultivars selected for large and brightly coloured flowers".

I must to confess to being somewhat confused about ranunculus. but I think it has something to do with the Greater Celedine and the Lesser Celedine.

" Buttercups usually flower in April or May but flowers may be found throughout the summer especially where the plants are growing as opportunistic colonisers, as in the case of garden weeds".

I have certainly found this to be the case in our garden, (see first photo) where the buttercups grow with great vigor, side by each with whichever garden flower they might fancy.

I know that you can buy ranunculus bulbs shaped like little oysters with dangly legs that spring forth in the spring in varied hues - a veritable feast of colours. 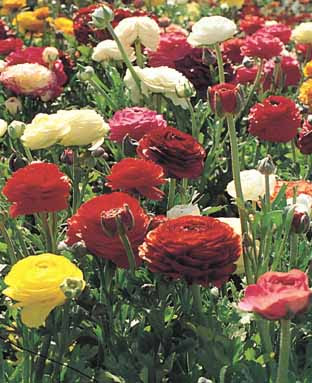 But I am only familiar with the lovely lustrous pushy type that twines its wandering roots around the Oriental Peony and is now making itself at home among the Iris.

I would welcome any information which would clear up my confusion!

For other R's skip on over to ABC Wednesday here.
Posted by Hildred at 9:40 AM

How beautiful they are! I'm not familiar with them, but they are delightful -- and so are you photos! Such lovely colors!

Simply beautiful flowers. My Mom used to grow them all the time. I love the variety of colors. Thanks for the memory.

now I know!
...and so beautiful!
have a great day!
come and visit my ABC if you have the time!

You know a lot about flowers! I only know the buttercup, which we call "boterbloem", meaning "butterflower".
Thanks for the information. Thanks also for the visit! Of course you are welcome to my library!

We had a lot of common ranunculus (buttercups) in our garden and they were a real nuisance. You can't pull them up without the roots breaking off in the ground and then they grow again. But the cultivated ranunculus is beautiful!

My mother used to grow the ones in your last photograph, beautiful. I did not realise they were related to the buttercup, how interesting. I love to see the fields when they are covered in buttercups.

Superb! I had no idea the little buttercup which crops up here seconds after the final spring snow was related to the garden flowers you've so aptly photographed. Gorgeous!

Hooray for Latin, which really opens up the category, esp for the more arcane letters coming up.
Thanks for the info.