F is for Fintry and for Fire

Fintry is an historical part of British Columbia which is now a beautiful Provincial Park on the west shores of Okanagan Lake, half way between Kelowna and Vernon.

Captain Thomas Shorts first settled on this delta, preempting in 1882 what was soon called "Shorts' Point" but unfortunately the Captain was more interested in transportation on the lake than in fulfilling the terms of the official agreement that required him to improve the land. He had a thriving business, transporting freight and passengers from Vernon to the Penticton, but the arrival of CPR sternwheelers in 1893 put Shorts out of business.

He sold the delta, and eventually it ended up in the hands of James Cameron Dun-Waters, who renamed the property "Fintry" after his home in Scotland. 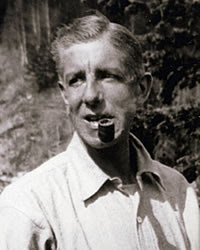 From the "history of Fintry" comes this description of the "Laird of Fintry"...

"He was a fascinating man of contrasts. He was a frugal Scot but generous, too. He revered tradition but was both innovative and inventive. Dun-Waters was an aristocrat but often dressed so casually he'd be mistaken for a tramp. He was a gracious host, passionate about his beliefs and a stern but fair employer. He would accept nothing but the best in himself, his staff or his projects".

James Dun-Waters built a Manor House for his first wife, Alice, from the Granite cliffs located on the property. 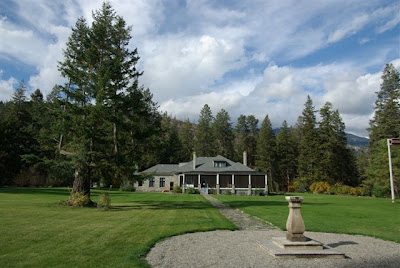 In 1924 Dun-Waters decided to add an impressive trophy room to the house, containing a stone grotto built to showcase a Kodiak bear he had shot and had mounted. While construction was underway Alice died and a month and a half later this version of the Manor House burned to the stone foundations. It was immediately rebuilt on the same foundations, and Dun-Waters lived there for the rest of his life.

Before he died he sold Fintry for one dollar to an English philanthropic organization that 'sent orphans from the streets to the 'Colonies" where they could learn to be farmers and earn a living for themselves'.

Fintry Falls, located on the property, was of immense help to Dun-Waters, but it took his ingenious mind to capture the creek's power in a system of wood stave, wire wrapped pipes. The harnessed water made it possible for the Laird to have spray irrigation for orchards and gardens plus running water in houses and barns and hydro power to grind grain and run a sawmill. 'By tying a Pelton wheel into the system he generated electricity. He even had his own telephone network linking the main buildings'. 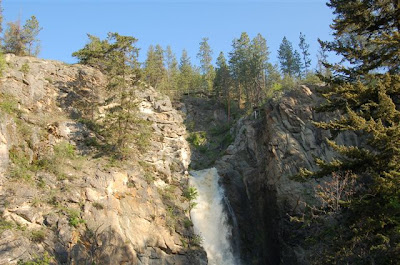 You can read more about Fintry Estates here and the pleasures it provides for campers, hikers, birdwatchers and nature lovers.

This summer the Park was in dire danger from a voracious wild forest Fire that ravaged Terrace Mountain during parts of July and August, but all evacuees are now back in their homes and the Fire has left these parts and sprung up in other areas of the Province. 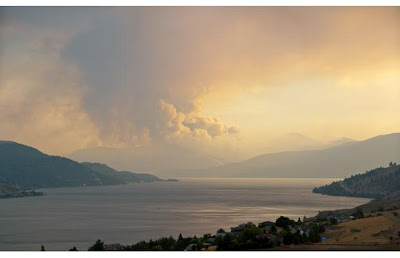 ABC Wednesday has "F" stories from all over the world, and you can click here to enjoy them, thanks to Mrs. Nesbitt.
Posted by Hildred at 7:39 PM

Excellent post. One more place that I would love to visit.

I enjoyed our camping trip to Fintry a couple of years ago. I glad it survived the fire. Did the new "resort style" housing development on the hillside just before Fintry coming up from the south survive the fire?

Lovely pictures and interesting information. Love the last one especially.

Thank you very much for this very interesting history about what must a character indeed.

That was an interesting post. It's great to hear about these places and their history.

It's great that Finty is being preserved for future generations to enjoy.

So lovely.
Thank you for the history.
Sherry

What a wonderful post and interesting piece of history.

Interesting post Hildred and that last photograph looking over the lake is beautiful. Love your header, by the way.

Looks like a lovely place with a fascinating history. I wonder how the orphans lives turned out.

He sounds like a wonderful man - creative, intelligent and caring. So sad that he lost his wife.

It looks like a beautiful spot. It's good to know it's still accessible to people!

Thank you all for visits, - Fintry is a lovely camping spot now, - Sally, so nice that you have been there and enjoyed it.

I have always admired the Laird for his noblesse oblige and for his very inventive mind.

Another great place to visit in the north Okanagan is the historic 'Keefe ranch, but I will save it for the letter 'O'