T is for Tattoo

"a beat of drum and bugle-call at night, calling soldiers to their quarters" The word tattoo originated with the closing time cry in the inns of the Low Countries during the 17th and 18th centuries - 'Doe den tap toe' - (turn off the taps - encouraging the local inn-keepers to stop serving beer and send the soldiers back to their barracks).

And from that simple, ordinary part of military life comes all the magnificent pomp and ceremony of the many Tattoos held through the world.

They are all stirring, but none as splendid as The Edinburgh Tattoo, the annual Military tattoo given by British Armed Forces, Commonwealth and International military bands and display teams in the Scottish capital Edinburgh. 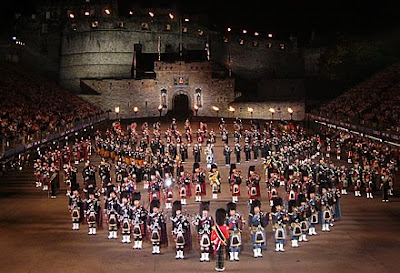 "2009 sees Scotland’s colourful military musical spectacular celebrate its 60th season, while paying tribute to the 250th anniversary of the birth of Scotland’s national bard, Robert Burns, and playing its part in Scotland’s first ever year of Homecoming".

The Tattoo is set up and run for charity, and over the years it has raised about five million pounds for service and civilian organizations.

Although the Scottish Regiments and Bands perhaps dominate there have been representatives from over forty countries taking part in this marvelous event. The colours and the music and the pageantry from a diversity of cultures make it a truly global affair, and the Scots are fabulous hosts.

The first overseas regiment to participate was the Band of the Royal Netherlands Grenadiers in 1952, along with other performers from Canada and France.

Each evening traditionally concludes with a flag-lowering ceremony (see Beating Retreat), with the bugles either sounding the Last Post, or the "Sunset" bugle call of the Royal Marines, and ends with a floodlit lone piper playing a Lament from high on the Castle ramparts.

The first lone piper was Pipe Major George Stoddart, who played in every performance for the first eleven years and was followed by his son, Major Gavin Stoddart.

It is a poignant performance, - and the bagpipes are a poignant and stirring instrument. 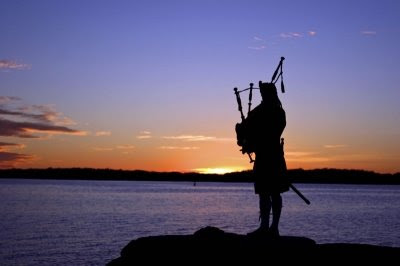 This is very interesting! I didn't know the origin of tattoo. I just read a different post of tattoo. The sunset piper shot is stunning.

Greetings from the ABC Team!

What a lovely picture of the lone piper!

I've never seen the Edinburgh Tattoo, although I'd like to. I'd have to take someone else though, because my husband would hate it!

Terrific photos - I'm not fond of pipers, at all, but can appreciate those who are! Nice post!

See my May 30th post to see a US Marine in a Scottish Kilt. It may be of interest to you. I learned a lot talking to the man in the kilt.

This is where my husband and I differ. I love the pipes he doesn't. Two of our daughters attended a lovely Tattoo while in Scottland. They said it was the highlight of their vacation.
Makes me think it must soon be time for the highland games here in soon
Smiles