A strange name for this spectacular pass that lies between Lake Louise, Alberta and Field, B.C.!

In 1858 the Palliser surveying expedition was given the task of finding a way across the Great Divide. In August of that year James Hector, a British medical doctor, geologist and natural historian, set out to search for mountain passes crossing this Continental Divide into the western river valley. He and his men camped at Wapta Falls. When a pack horse bolted James Hector gave chase, but as he rounded up the horse it kicked him, breaking his ribs.

James Hector was knocked unconscious. His guides thought he was dead, and had even gone so far as to select a site for his grave. It is said that he regained consciousness within a minute or two of being buried alive, and that he managed to wink an eye to show that he was still alive. This story is not officially recognized, but it adds to the adventure..... Hector recovered and he and his men followed the river east to its summit pass. "Both the river and the pass were named 'Kicking Horse' for Hector's ornery steed".

In 1885 Donald Smith drove the last spike that marked the fulfillment of a Confederation promise to build a railway in Canada, stretching from Sea to Sea. Nowhere had it been more difficult or treacherous than through the Rocky Mountains. West from Lake Louise the trains chugged up the mountain to Kicking Horse Pass, but once they had reach the top it was a deadly descent to the division point at Field - a hurtling drop of almost 300 meters in just over 6 kilometers at a grade of 4.5%. There were many accidents and several railroaders lost their lives. With 4 locomotives required to move even the shortest train up the mountain it was a costly endeavour.

In 1907 John. E. Schwitzer, a CPR design engineer, proposed the building of 2 spiral-shaped tunnels, with tracks that crossed over themselves in a figure 8. They were completed in 1909 and now, a hundred years later, are still used as part of the CPR Mainline.

Here is an excellent source of text and pictures.

And here is a video posted by Terry Rowsell on February 21st 2007.

We have not traveled this CPR route since our honeymoon, almost 64 years ago, and these days it is a pretty expensive trip by rail, but there is a fine viewpoint along the Trans Canada Highway which doesn't give you the thrill of the actual experience (especially if you are on your honeymoon) but does provide enough of a view to put one in awe of this engineering wonder. The trains which travel through Yoho National Park (Yoho is native for WOW) are no longer short, - nor do they require four locomotives, - at times the first locomotive is emerging from the second tunnel while the caboose is just disappearing into the first tunnel, on its way to making an almost complete circle within the mountain. 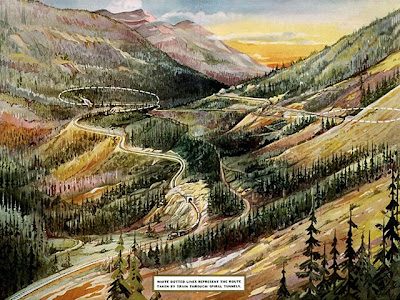 Come and see this splendid engineering feat and the spectacular mountains that surround it.....
Posted by Hildred at 8:57 PM

Wow, the spiral tunnels are fascinating! Thank you for introducing them to me. I so want to visit the Canadian Rockies someday; all the pictures that I see of them just blow me away.

Many congratulations on your long life together!

I loved your story and the background about how the name came about. It also gives me even more incentives to actually go to Canada soon.

Such an interesting "K" post. I love the old sketch of the pass. Thanks!

Hi Hildred and Charles, Thank you for such a great K post and so much history. I just took the train to Toronto from Vancouver and had a wonderful time. Unfortunately is snowed most of the way...surprise, surprise but the trip was great anyway.
I have always had a fascination with trains and have travelled across Canada from coast to coast on the train several times in my life.
When I was in my early twenties I worked in Banff and had heard the story of the Spiral Tunnels. I had also always wanted to jump a freight. Don't know what possessed me but one full moon night I hitchhiked to Golden BC and hopped an eastbound freight(an open empty sulpher car). It was the most amazing experience I have had even though I was scared for most of the time. I had read that when the steams engines were in use many people suffocated when the trains went through the Spiral Tunnels. I survived but I sometimes wonder how. I expected the freight to slow down going through Banff but it didn't. It finally slowed enough near Canmore that I could jump and then I had to hitchhike back to Banff at 2 o'clock in the morning smelling of deisel exhaust. I had to throw out my clothes!
For your information VIA Rail has a great winter seniors rate for travel. I came across Canada for $306. and I could have brought someone with me for FREE! If we don't use our rail system we are going to loose it and that would be shameful. www.viarail.ca
Thanks for sharing and have a great day.
Smiles
P.S. And thank you for writing your history, it is so important.

Awesome tunnels and train. I recently read the The Outlander by Gil Adamson set in the Canadian Rocky Mountains so it was great to see your pictures.

What an incredible feat that is! One day I'd love to see it. Thanks for telling us all this.

Thanks for your postings, - I really enjoyed re-educating myself about this pass, and looking up the various videos and pictures.

And Carolyn, thank you for your great adventure tale, - you were a brave girl! Also for the info re Via Rail expenses. Unfortunately at this stage of the game Charles and I would need a few comforts to help us along the way, and these are the luxuries that seem so expensive....but wouldn't it be nice!

Fascinating piece! I so enjoyed reading this!

I love the story about the kicking mule! I bet that's true ... though I'm not so sure about the part where he winks to avoid being buried alive!

Wonderful history and the black and white image that you started with is incredible. The legend has a bit more of a kick to it than the story of Dead Horse Point, which we visited in Utah last fall.